The Bruins long have been considered a one-line team when Patrice Bergeron, David Pastrnak and Brad Marchand did a lot of the heavy lifting for Boston over the last few seasons.

But it may be time to retire that narrative.

The Bruins beat the Coyotes 3-2 on Saturday night at TD Garden to not only snap Arizona’s four-game win streak but beat the Yotes for the 18th consecutive time.

Craig Smith accounted for two goals while Charlie Coyle potted the game-winner in the final four minutes of the game.

Trent Frederic had two assists as that third line continues to stay hot and help the Bruins win games.

“I think they’re playing to the identity of how they would need to play to score on a regular basis which is typically, they’re playing behind the D, they’re winning pucks, getting pucks back, good forechecks in synch together in the O-zone with their spacing,” head coach Bruce Cassidy said during his postgame press conference, as seen on NESN’s postgame coverage. “They’re scoring a lot of goals like that. They’ve capitalized on the rush by they’re not overthinking it. … They’re doing a good job with all that stuff, away from the puck right now they’re very reliable with their board work. … They’re doing a lot of smart things.”

Smith in particular has been cooking with gas of late, scoring seven goals in the Bruins’ last five games.

“We’re still a work in progress, we’re all three working hard, trying to get in the right areas, trying to shoot the puck more,” Smith told reporters, per team-provided audio. “I think that’s been an emphasis when we get in the zone, and I think Charlie and Trent are so good at protecting the puck and we can create stuff off of that and have them moving their feet. I think we can find lanes and get in spots where we can get the puck to the net.”

Coyle had high praise for his linemates and noted that everything seems to be working in their favor.

“I think consistently playing together, that always helps and you get to know your linemates’ tendencies and learn more about them and their routes and how they play, where they like to go,” Coyle told reporters. “? And then you get rewarded a little bit and you start to gain confidence and make plays. we’re always positive with each other. we don’t harp on each other. We’re always there supporting each other whether it’s on the ice, off the ice talking, and we’re always looking to improve. ? Everyone’s doing their job.”

Here are some other notes from Saturday’s Bruins-Coyotes game:

— The Bruins continued to have success against the Coyotes. Saturday’s win marked the 18th in a row against Arizona.

— Jeremy Swayman continues to solidify himself at the Bruins’ No. 1 goalie.

— The Bruins still struggled with last-second goals Saturday. This time it came with 0.5 seconds left in the second period and allowed the Coyotes to cut Boston’s lead in half.

“Then you give up that goal at the end of the second period. That’s a little bit of immaturity on our extended shift and now their top guys are out there fresh, now they’re back in it,” Cassidy told reporters. “… That’s where I thought we failed.”

— Pastrnak, Bergeron and Marchand were held scoreless but did combine for 17 shots on net.

The trio has gone cold at times, but Cassidy doesn’t seem to be too worried.

“They’re getting good looks but, even on the power play, Bergy had a few in front and some other looks,” Cassidy told reporters. “It’s just, for them, they’ve got to stick with it. It’ll come, they’re too good. But hopefully they don’t get away from what they do well.”

— We figured you’d like to see the Swayman-Linus Ullmark goalie hug:

— The Bruins have the next few days off before hitting the road and returning to the ice Tuesday night when they take on the Blackhawks in Chicago. Puck drop is set for 8:30 p.m. ET on NESN. 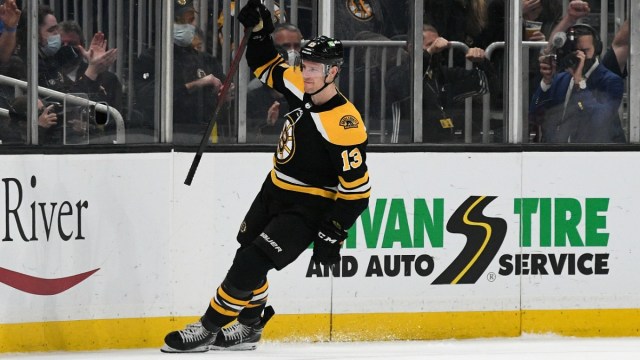 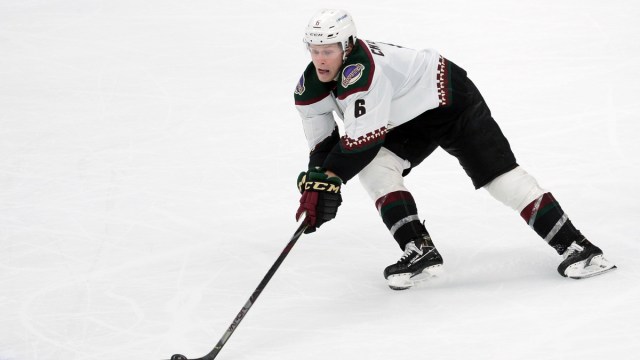