BOSTON — The Bruins fell to the St. Louis Blues on Tuesday at TD Garden, and head coach Bruce Cassidy didn’t hold back in his criticism following the 4-2 decision.

Asked what led to the Bruins giving up a 2-1 lead — after crawling back from allowing a goal to the Blues seconds in — Cassidy gave credit where it was due to the red-hot Blues but acknowledged his main issues were with his own team.

Cassidy also specifically called out Charlie Coyle, who finished a minus-two rating and one shot on net. Coyle was semi-responsible for one of Vladimir Taresenko’s two goals on the night, as the Bruins forward turned the puck over and the Blues scored on that won possession.

“Charlie Coyle refused to shoot the puck toward the net,” Cassidy said. “We had people going there and he loses a battle and they’re gone.”

The Bruins could have clinched a playoff spot with at least a point against the Blues (though it also would have required some help from the Pittsburgh Penguins, who were playing the New York Islanders.) Instead, they lost their second straight, and Cassidy noted similarities between Tuesday’s game and Sunday’s road loss to the Washington Capitals — and the early-season Bruins.

Here are more notes from Tuesday’s Bruins-Blues game:
— David Pastrnak and Hampus Lindholm have been out for several games, so their absence wasn’t a surprise. But Matt Grzelcyk also was sidelined for Tuesday’s tilt after suffering an upper-body injury Sunday against the Washington Capitals.

Connor Clifton filled in for Grzelcyk on the blue line.

— Brandon Carlo disappeared from the bench midway through the first period. Cassidy did not have much information after the game, but said he believed Carlo was sidelined with an injury rather than an illness.

“He left, wasn’t feeling good midway through the first,” Cassidy said. “My guess, he’ll get re-evaluated tonight or tomorrow. I haven’t heard. I was told he was out for the night. Anything further, I don’t know.”

— Torey Krug had quite the night in his return to Boston. The former Bruins blueliner (who was celebrating his 31st birthday) was back at TD Garden for the first time since joining the Blues as a free agent in 2020, and he scored a tying goal in the second period.

— Cassidy coached in his 500th career game Tuesday night. It was his 390th game with the Bruins.

— Jeremy Swayman returned to the pipes after giving way to Linus Ullmark in net for two games. In his first start in a week, Swayman made 26 saves.

“His game was good,” Cassidy said. “Some of them, there’s no chance. … I thought Swayman was fine.”

— The Bruins return to action Thursday against the Ottawa Senators. Puck drop is at 7 p.m. ET, and you can watch the game as well as pregame and postgame coverage beginning at 6 p.m. on NESN. 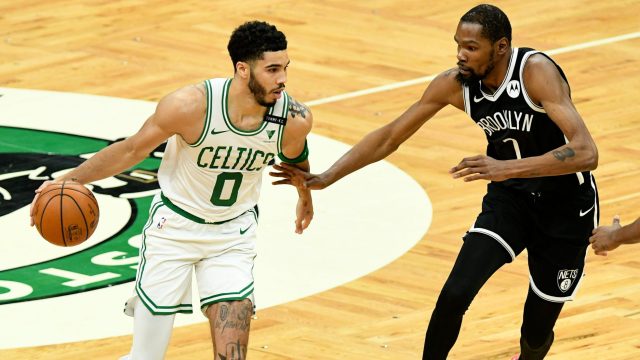 Nets Fans Chant ‘We Want Boston’ Ahead Of First-Round Series Vs. Celtics