The Blues won their sixth consecutive game with a 4-2 defeat of the Boston Bruins on Tuesday at TD Garden.

ONE BIG TAKEAWAY
In the first period, the Bruins showed they wouldn’t quit. But that didn’t last en route to the final horn.

A hush fell over TD Garden early as the Blues scored just 34 seconds into the clash, but Boston wasn’t down for long. Patrice Bergeron scored 15 seconds later to even the score at 1-1. Later in the frame, the Blues took a 2-1 lead, but Boston successfully challenged and had the goal overturned due to offsides. Shortly after that call, it became a 2-1 game thanks to Marc McLaughlin.

But the Bruins lost steam in the second period, allowing a pair of goals in — yes, you guessed it — the final minutes of the period. Despite Boston outshooting the visitors 13-8 in the frame, the Blues took a 3-2 lead after 40 minutes.

St. Louis kept the momentum going with an insurance goal midway through the third period.

STARS OF THE GAME
— Give it up for the hometown kid. McLaughlin picked as good a time as ever for his second NHL goal. The rookie scored at 16:59 of the first period to give Boston a 2-1 advantage over the Blues.

— Patrice Bergeron’s first period goal not only tied the game — it was the captain’s 20th goal of the season. This is the 13th season that Bergeron has reached that milestone.

— Hello, old friend. Torey Krug returned to Boston for the first time since signing with the Blues in 2020, and he scored the tying goal for St. Louis in the second period.

Fans who placed a first goalscorer prop bet didn’t have to wait very long to learn their fate, considering the first point came just 34 seconds into the game. Those who picked David Perron earned a healthy payout, as the Blues winger was +1300 as the first scorer.

UP NEXT ON NESN
The Bruins are back in action Thursday, hosting the Ottawa Senators at 7 p.m. ET. NESN will air the game as well as an hour pregame and postgame coverage beginning at 6 p.m. 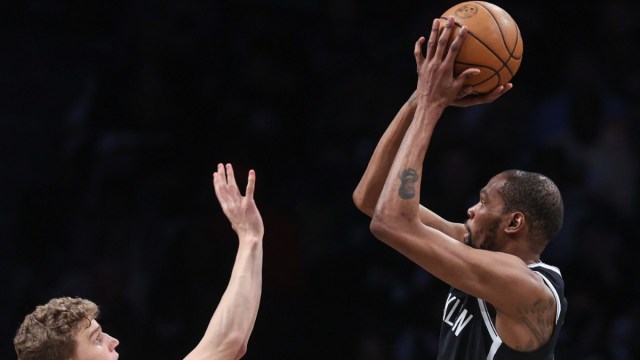