Being the new person in any situation is tough, especially when you join a new team like Derrick White did midway through the season.

The Boston Celtics guard went through some struggles when he first arrived, but White’s new team made sure he felt welcome at all times. Couple that with his newfound dad strength after the arrival of his newborn son last week and he was able to “set the tone” for the C’s in their Game 4 win over the Miami Heat on Monday night.

White scored the first seven points for Boston and played a big role in the win at TD Garden. After the game, Robert Williams spoke about how the Celtics have made White feel comfortable and get acclimated with the team.

“Just letting him know that he can be comfortable with us, most of all. Letting him know he’s welcome. I tried to do that since the day he got here,” Williams told reporters, as shared by NBC Sports Boston. “It’s hard especially middle of the season coming to a team. You see guys laughing, joking, playing. You’re the new guy. So I just try to let him know we’re thankful for him. Welcome to this brotherhood. Speak up when you see something. Don’t be scared. And like I said, I feel like he set the tone for us defensively early in the game.

“Everybody needs a shoulder to lean on sometimes, so it’s just reaching out as much as possible. I might just ask him what he had for breakfast, stuff like that.”

Williams and White also can talk about how their sons share the same name “Hendrix.”

White and the rest of the Celtics look to push the Heat to the brink of elimination in Game 5 on Wednesday night in Miami. 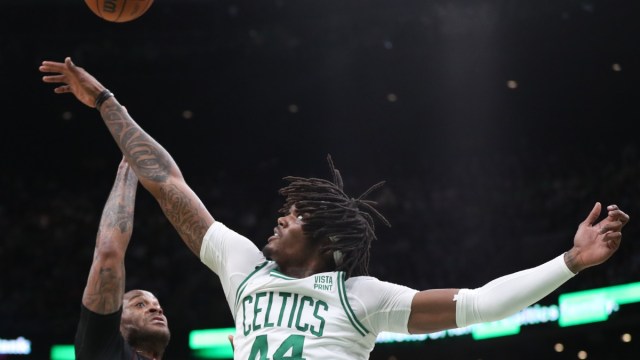