After playing in 149 career playoff games, Al Horford’s next postseason appearance will come in the NBA Finals.

Reaching that stage is a first for the 15-year NBA veteran, and it certainly was a lengthy journey to get to that point. Horford reveled in the moment, too, flinging the ball skyward in jubilation as the buzzer sounded on the Boston Celtics 100-96 victory over the Miami Heat in Game 7 of the Eastern Conference finals on Sunday.

And Horford certainly wasn’t celebrating the opportunity that has finally come his way alone.

Plenty of Horford’s teammates were thrilled to see him get over the hump as well, noting how things paid off for a player who goes about his business on and off the court in the right manner.

“Nobody deserves it more than this guy on my right, right here, man,” Jaylen Brown said following the contest, per NBC Sports Boston. “His energy, his demeanor, coming in every day being a professional, taking care of his body, being a leader, I’m proud to be able to share this moment with a veteran, a mentor, a brother, a guy like Al Horford. He’s been a great all season, really my whole career. I’m happy to be able to share this moment with somebody like him.”

“He’s selfless,” Smart said, per The Athletic’s Jared Weiss. “Al could care less about the numbers. He cares about the wins and this team.”

The 35-year-old Horford, who is in his second stint with the Celtics after Boston traded for him this past offseason, has turned back time this postseason by averaging 11.9 points on 50 percent shooting to go along with 9.6 rebounds, 3.5 assists and 1.6 blocks per game. Horford has also played 36.7 minutes per playoff contest as well.

Horford will look to keep his steady production going when the Celtics take on the Golden State Warriors for the NBA title. Game 1 of the NBA Finals is set to take place on Thursday at Chase Center. 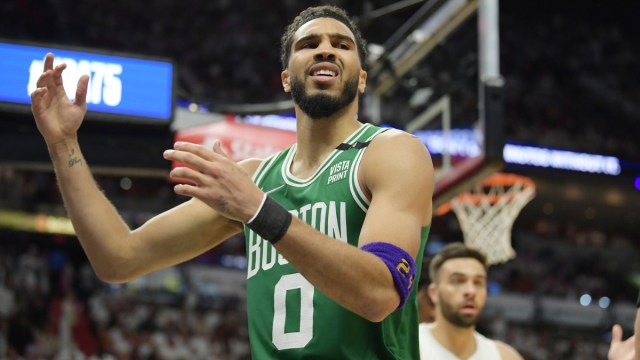 For Celtics’ Jayson Tatum, ‘Toughest Moment’ Of Season Long Behind Him