The Patriots took a step toward actual, fully padded football on Day 3, donning soft shoulder pads (aka “shells”) underneath their practice jerseys for the first time this summer.

There also was one notable new absence: Brian Hoyer. Mac Jones and Bailey Zappe were the Patriots’ only quarterbacks. Hoyer participated in the first two camp practices but didn’t take any reps in team drills during Thursday’s session.

Rookie running back Pierre Strong was limited for the third consecutive day, but he upped his level of activity, moving from the rehab field to the main field midway through practice. Strong didn’t take any live reps but observed team drills, occasionally chatting with running backs coach Vinnie Sunseri.

QB REPORT
Mac Jones again started hot in 7-on-7s, opening with seven consecutive completions as the Patriots continued to focus heavily on red-zone work. Included in those were a highlight-reel touchdown pass to tight end Jonnu Smith, who high-pointed the ball over safety Kyle Dugger and let loose a celebratory spike; another Smith-over-Dugger win two plays later; and a lofted touchdown into the corner to wide receiver Kendrick Bourne, who beat Malcolm Butler on the play.

One completion came with an asterisk, however, as Tre Nixon’s contested touchdown catch against Shaun Wade likely would have been broken up had Wade not been wearing pads on his hands. Jones seemed to acknowledge this, making the “incomplete” signal with his hands after the play. Wade later broke up a goal-line hitch to DeVante Parker on Jones’ eighth and final 7-on-7s reps.

Jones was less efficient in full-team 11-on-11s, going 6-for-11. Two of his incompletions were caught by receivers (DeVante Parker and Tyquan Thornton) but out of bounds, and another was batted at the line by Davon Godchaux.

A miscommunication between the QB and wideout Jakobi Meyers also resulted in an easy pick-six for Jalen Mills, as Meyers broke toward the sideline when Jones seemingly expected him to sit. It was Jones’ first interception of training camp.

On his final two reps, Jones displayed his underrated ability to make throws on the move, scrambling from pressure before finding running back Kevin Harris and Meyers for short touchdowns. On the latter, Jones motioned to Meyers as he drifted to his right, prompting the wideout to divert his route and separate from safety Joshuah Bledsoe.

Zappe went 1-for-2 in 7s and 5-for-7s in 11s and was intercepted twice, including a badly underthrown fade to Smith that was picked by safety Adrian Phillips. But he also delivered easily the best pass he’s thrown in any open practice to date, beating tight coverage by Terrance Mitchell with a perfectly placed throw to Ty Montgomery in the corner of the end zone.

That was an encouraging moment for the fourth-round rookie, who’s struggled with accuracy during the early stages of his Patriots career. Zappe also had one small (and potentially intoxicated) group of fans passionately cheering his name throughout the second half of practice.

PLAYER OF THE DAY
Smith. He beat Dugger for the two touchdowns in 7-on-7s, caught a pass from Jones in 11s and snatched another score over the head of rookie cornerback Marcus Jones in an early half-field period. This came after Smith skied over Bledsoe for a contested touchdown during Thursday’s practice.

The high-priced tight end received widespread and well-deserved criticism for his play last season, but he’s looked much better since the start of spring practice, regularly beating starting-caliber safeties for impressive receptions.

Whether it’s the result of being more comfortable with Jones after a year in New England or scheme changes to accentuate his strengths — it’s likely a combination of both — Smith is giving fans plenty of reasons for optimism as he looks to bounce back from his dismal 2021.

PLAY OF THE DAY
Zappe’s touchdown to Montgomery, with Smith’s first over Dugger a close second. Fellow tight end Hunter Henry also beat Dugger for another tight-coverage score along the left sideline, with Jones delivering that pass.

It’s been a strong summer thus far for both Smith and Henry, whose contracts pay them a combined $25 million annually.

Belichick is devoting much more of his attention to the offense than he did in previous years, and he theoretically could install himself as New England’s play-caller if he believes he’s better suited for that role than Patricia or quarterbacks coach Joe Judge, neither of whom has much offensive coaching experience.

Patricia still projects as the favorite to call plays, but what we saw Friday adds an interesting wrinkle to that discussion.

— Jalen Mills and Terrance Mitchell have formed the top cornerback duo thus far, followed by Butler and Jack Jones. The Patriots made a change in the slot Friday, with Marcus Jones taking first reps and Wade repping second. Wade was part of the top unit during the first two practices.

Jonathan Jones has been the Patriots’ top slot corner for the past several seasons, but he’s on PUP and has yet to take the field in camp.

— With veteran Devin McCourty seeing a light workload on Day 3, Bledsoe took his place on the top defensive unit during 11-on-11 drills. The 2021 sixth-round draft pick, whom McCourty called “super impressive” late last season, has been an early camp standout, forcing a team-high five incompletions across the first two practices.

Marcus Jones also saw action in McCourty’s usual role, rotating from slot to safety when the second-team defense came in. Jones also could be seen speaking with McCourty on the sideline, getting pointers from the longtime team co-captain.

Neither Bledsoe nor Jones has played a snap at the NFL level, but both earning reps with the defensive regulars — even if they came on what might have been a de facto veteran rest day for McCourty — is an encouraging sign.

— Marcus Jones, Dugger, Tre Nixon and J.J. Taylor took turns returning punts. Jones, a prolific college returner at Houston and Troy, had to run a lap after muffing one, but he had a chance to redeem himself after practice.

Before retiring to the locker room, the Patriots staged an offense-vs.-defense punt return competition, with Jones and Nixon competing see who could field the most. Round 1 was a simple punt off the foot of Bailey. Round 2 was the same, but with Jones and Nixon each holding one ball while they attempted to catch another. In Round 3, they started with two balls in their hands, and so on.

Both players caught the first four without incident, then failed at two attempts to grab a fifth. They finally succeeded on their third attempts in Round 5, Jones doing so with three balls stuffed inside his No. 52 jersey and another under his arm.

Belichick called off the contest after that and went to a tiebreaker: first-round rookie offensive lineman Cole Strange against undrafted rookie edge rusher DaMarcus Mitchell. That one ended quickly, with Strange scoring a swift 2-1 victory.

It was a fun way to end the Patriots’ third camp practice, but Jones took his task seriously.

“We still consider it as work, because it’s competition,” the third-round draft pick said. “… Anytime Coach says something about competition, we try to go ahead and give 110% in what we do.”

— Henry absorbed the biggest hit of the day when he collided with wide receiver Kristian Wilkerson in the back of the end zone. The tight end was slow to get up but appeared to avoid injury.

— Patriots cornerbacks wore pads on their hands in most of the competitive drills, but Justin Bethel still was able to notch an interception, cradling a Zappe pass intended for Thornton.

— Thornton repped as a punt gunner, as he did during the spring. That would be a new role for the rookie receiver. He said he had just two tackles in college at Baylor, and both came on interceptions.

— Montgomery continued to work as a receiver and running back, including taking handoffs during one run-game period. He’s been heavily involved this week.

UP NEXT
The Patriots will practice again Saturday morning at 9:30 a.m. ET before enjoying their first off-day of camp. 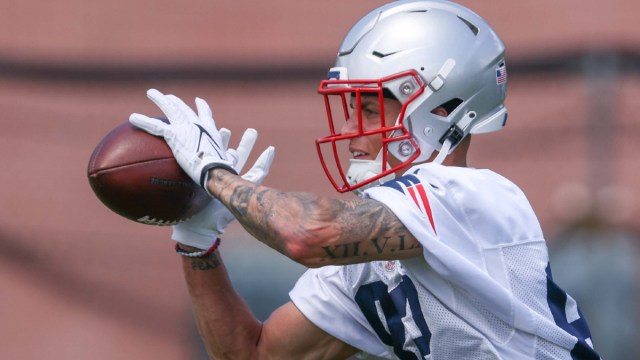 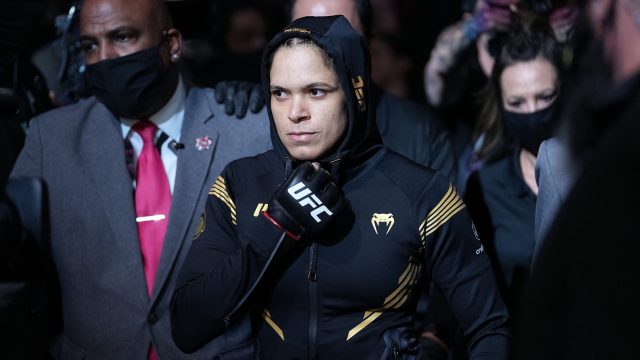