Jimmy Garoppolo was called on by the San Francisco 49ers earlier than many might have thought given Sunday’s brutal injury to starting quarterback Trey Lance.

Garoppolo, who was involved in trade talks throughout much of the offseason, stepped in for the final three-plus quarters and helped the 49ers to a 27-7 victory over the Seattle Seahawks. Before the season started, San Francisco shared its belief in Garoppolo despite naming Lance the starter, acknowledging how the Niners felt they now had two starting quarterbacks when many teams don’t have one. With Lance breaking his ankle in a season-ending injury, that belief was put to the test less than five quarters into their 2022-23 campaign.

“I thought he did a real good job coming off the bench, made some real key throws,” Shanahan said of Garoppolo, per the team. “I thought it got a real tough there in the second half when that rain came back, it was on and off, so we had to be a little selective in certain moments. Especially, it was tough when we lost our run game a little bit there in the third, early fourth because it was a little tougher to throw there when the rain started coming, but I’m real proud of Jimmy and how he came in and was ready for the moment and helped us get a win.”

Shanahan confirmed Lance would miss the remainder of the season as he is expected to undergo ankle surgery Monday. He offered a curt retort when pressed about the play-call in which Lance’s injury took place, though.

The offensive-minded head coach doubled down on his confidence in Garoppolo following the win as the veteran signal-caller threw for 154 yards while completing 13 of his 21 passes with one passing touchdown and one running score.

“The last three weeks or whatever, just seeing him in practice, seeing him on the field, throwing before he officially got back on our team. Jimmy’s played a lot of football, he just had to get healthy,” Shanahan said in reference to Garoppolo’s shoulder surgery this offseason.

“We feel very fortunate to have Jimmy here as our number two quarterback and especially when your starter gets hurt, it’s good to know the experience and how good of a player he is,” Shanahan added. “I feel like we’ve lost our starting quarterback. This would be, I think, the fourth time in six years. So, we have been in this before and I do feel we’re a little more prepared with our backup right now. So, I’m happy for that.”

Garoppolo had been practicing with the scout team but now will get the chance to run it with the starters as the 49ers get set to face the Denver Broncos in Week 3 on “Sunday Night Football.” 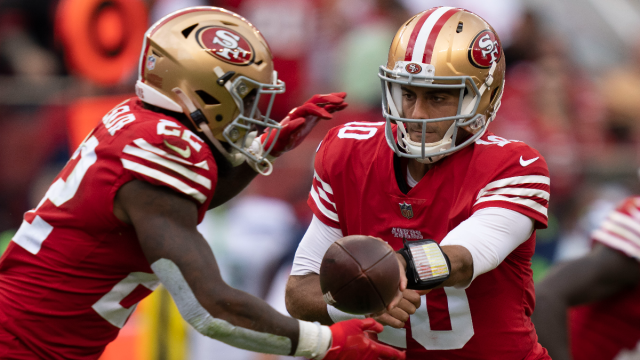 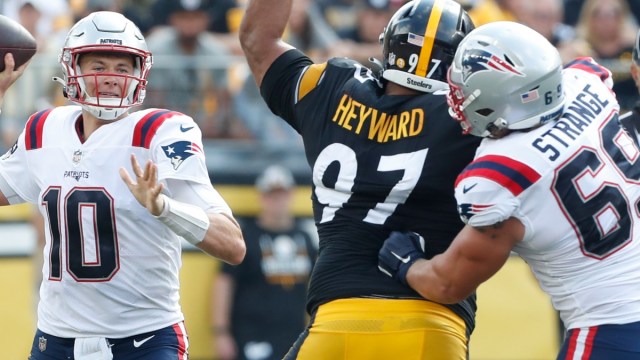 Cole Strange Holding His Own For Patriots Through Two Games