WEST PALM BEACH, Fla. — The Patriots are delivering all the talking points you’d expect on their early trip to Southern Florida.

It’s about a convenient opportunity for acclimation to Miami’s notoriously humid climate, you see.

“I think there are a combination of factors, but in the end, it all looks like it’s set up fairly well here,” Bill Belichick said last Sunday. “So, make the travel on Tuesday instead of on Saturday. We’ll already be down there. We’ll be able to just focus on the Dolphins.”

“I think it’s more of the conditioning. The heat is gonna be different,” cornerback Jalen Mills told NESN.com last week. “It’s going to be very important to get down there early,” defensive tackle Davon Godchaux added while speaking with reporters.

When asked Wednesday about the benefits of the trip, ex-Dolphins receiver DeVante Parker said, “The weather down here’s different.”

And, you know, it’s just like when New England stays on the West Coast for multiple weeks to alleviate the logistical and physical nightmares of back-to-back cross-country trips.

“We’ve been away for a week during the season multiple times in the last few years,” Belichick said Wednesday before practice at Palm Beach Atlantic University. “If it works out, it can be a good experience. I think this will.”

That’s all well and good, and there absolutely is value in spending extra time getting used to Miami’s climate, regardless of how hot it was in New England this summer. After spending one day in the greater Miami area, we can confirm the climate is more oppressive than the heat wave much of the Northeast experienced in August. Plus, the trip, which will see the Patriots practice for three days at PBAU, might offer a strong bonding experience for a roster that endured a rough training camp shrouded in external criticism.

Why, then, are the Patriots doing this now? They didn’t do it before opening the 2014 season in Miami, nor have they done it for any Dolphins trip during the Belichick era. The uncomfortable reality for New England fans is that longtime enemy Bart Scott might’ve been close to the truth when he labeled Belichick’s plan a “desperation move.”

Those remarks still might be a bit strong, as we’re not sure the greatest head coach in NFL history truly is desperate for anything. Moreover, Scott really played up the potential issues of exposing young players to South Beach for a week. The Patriots are in capable hands with their core leaders, which include first-time captain Mac Jones.

But it’s clear the Patriots are placing a larger-than-usual emphasis on beating a divisional rival in Week 1 and it’s easy to understand why.

New England is 3-6 in its last three meetings with the Dolphins, including three straight defeats. Belichick’s team also is 2-7 in its previous nine trips to Hard Rock Stadium. That latter point definitely underscores how difficult it is to play in Miami.

However, it’s their recent failures against the Dolphins that really matter for the Patriots, as well as their overall outlook for the 2022 campaign.

In a post-Tom Brady world, New England no longer can bank on a spot in the NFL playoffs. Honestly, based on how they looked during training camp, you’d be a contrarian if you insisted the Patriots currently look like a playoff team despite making it to the postseason in 2021.

The Patriots simply can’t afford to get off to a slow start this season. They got bailed out by a soft middle portion of the schedule in 2021, loaded with teams enduring injuries and quarterback issues, but struggled at the beginning and end when facing quality opponents. There is no such cupcake run this time.

Yes, Weeks 5 through 8 are promising, with matchups against the Detroit Lions, Cleveland Browns, Chicago Bears and New York Jets all offering potential easy victories. But would you really be stunned if the Lions, who were a competitive, tough out last season, pull off an upset? The Browns won’t have Deshaun Watson, but their roster is better than New England’s. You could say the same about the Jets, although their own quarterback situation is growing increasingly concerning.

In truth, the Patriots realistically could lose to any team this season. And an 0-4 start against the Dolphins, Pittsburgh Steelers, Baltimore Ravens and Green Bay Packers absolutely is on the table. New England must avoid that at all costs, and Belichick knows it.

But the players predictably will tell you that this is neither a revenge game nor an all-hands-on-deck attempt to start the season on a high note.

“It’s not about ‘against them,’ — like you said, it’s a division game,” Mills told NESN.com “At the end of the day, that’s the plan from April in the offseason. You know, you wanna win your division first. … So, regardless if it was Miami or the Jets or Buffalo Week 1, we wanna win the game regardless.”

“Just gotta win,” Judon, who also played up the weather factor, told reporters. “It’s the first one, it’s a new year. Can’t win ’em all if you don’t win the first one.”

Back to Scott’s allegations of “desperation,” the actual site of New England’s trip lends at least some credence to his theory.

The Patriots are practicing at school that few — including Parker, who played in Miami — have heard of. Palm Beach Atlantic, located roughly an hour north of Hard Rock Stadium, doesn’t even have a football program. Nor does it have any high-end locker rooms or facilities for the Patriots to take advantage of. Patriots players, after a police escort, walked directly off their buses and onto a pair of dry, patchy soccer/lacrosse fields. They arrived in full pads and presumably left in them, back to whatever hotel they were staying at. The entire facility also didn’t feel very secure. It would be easy for the Dolphins to go full-Spygate and have someone watching practice through binoculars. They wouldn’t even need to hide in bushes.

At least this makeshift goalpost was waiting for them:

What does Belichick think of the facilities?

“Should be good,” he said Wednesday.

Why Palm Beach Atlantic University and not somewhere closer to Miami?

“It just worked out,” he said. “We looked at several options. This is the best one.”

That it was the “best one” shows just how, dare we say, desperate Belichick was to make this unprecedented — and probably necessary — trip a reality. 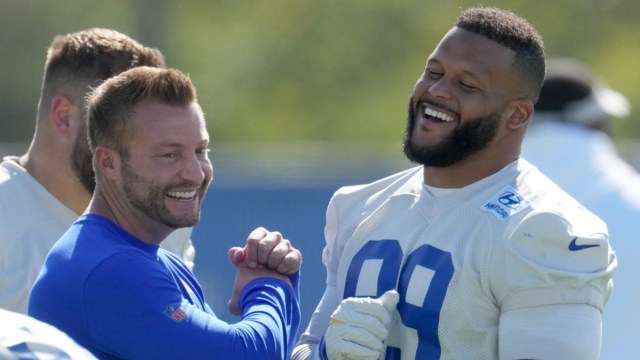 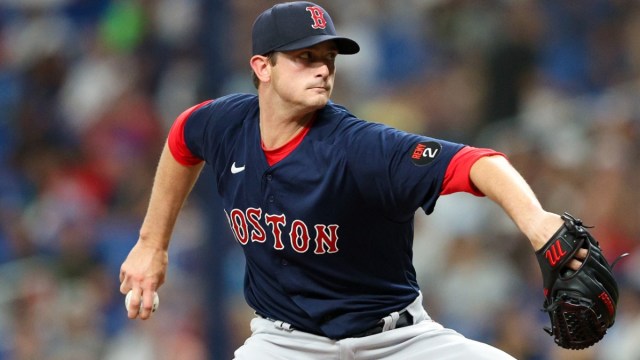