UPDATE: Mac Jones (ankle) officially was ruled out for Sunday’s New England Patriots game on Friday. This story has been updated to reflect that change.

The odds are stacked against the New England Patriots this week. They’re on the road, facing a generational quarterback and a perennial Super Bowl contender, with a journeyman backup leading their offense.

The betting line reflects that challenge.

The Patriots entered Sunday’s matchup with Aaron Rodgers and the Green Bay Packers at Lambeau Field as 9.5-point road underdogs. Since 2001, only one New England opponent has been favored by more: the 2020 Kansas City Chiefs, who were coming off a Super Bowl title when they welcomed a shorthanded Patriots squad to Arrowhead Stadium in Week 4.

It’s no coincidence that New England’s starting quarterback in that game was Brian Hoyer, who stepped in on short notice after Cam Newton tested positive for COVID-19. The Patriots put up a spirited fight against Patrick Mahomes and the defending champs, but two disastrous red-zone errors by Hoyer doomed them in a 26-10 loss.

Hoyer will have a shot at redemption this week as he starts in place of an injured Mac Jones. (Jones, who suffered a high ankle sprain in last week’s loss to Baltimore, did not practice this week and officially was ruled out Friday.)

Can he lead the Patriots to a victory at Lambeau, breaking his own ignominious streak of 11 consecutive lost starts? Again, the odds favor neither the 36-year-old QB nor his team in this one. But is there a realistic blueprint for Hoyer to pull off an upset? Sure.

1. Keep mistakes to a minimum
The Patriots don’t need Hoyer — a 14-year NFL veteran in his third tour of duty with New England — to win this game for them. They just need him to not lose it the way he did in Kansas City.

In that game, Hoyer cost New England at least six points when he first took a sack and allowed time to expire in the first half, mistakenly believing the Patriots had a timeout remaining, and then later held the ball for far too long on a third-down pass play, resulting in a strip-sack that the Chiefs recovered. Both plays came inside KC’s 20-yard line with the Patriots facing a manageable 6-3 deficit. The second got Hoyer benched for Jarrett Stidham and demoted to QB3 for the rest of the season.

Any path to an upset this week needs to start with Hoyer being a competent game manager. He doesn’t have to play flawless football, but he must avoid those kinds of unacceptable mental errors at all costs. He also can’t turn the ball over the way Jones has this season, as giveaways were a major contributing factor in each of the Patriots’ first two losses. Since the start of last season, the Patriots are 1-9 when losing the turnover battle and 2-10 when committing multiple turnovers.

It’s important to note Hoyer should be more prepared for this start than he was in 2020. His last time out, he found out Saturday morning that he’d be replacing Newton, giving him exactly zero practice time to ready himself. Now, although Jones’ status remains unsettled, Hoyer has been able to take first-team reps all week while running an offense that, unlike the one New England implemented two years ago to feature Newton’s rushing ability, is well-suited to his skill set.

2. Exploit the run-game mismatch
Last week, the Patriots faced a suspect Ravens pass defense and capitalized, with Jones throwing for a career-high 321 yards before late turnovers derailed his positive outing. This week, they’ll see a Packers defense that’s struggled to defend against the run.

Through three games, Green Bay ranks 18th in rushing yards allowed per game, 24th in yards allowed per carry and 32nd — dead last — Football Outsiders’ rush defense DVOA, which measures a unit’s overall efficiency. The Patriots’ rushing offense, meanwhile, leads the NFL in DVOA despite ranking in the middle of the pack in both conventional metrics. They’re eighth in the league in expected points added per rushing play, per rbsdm.com, with Damien Harris (seventh) and Rhamondre Stevenson (ninth) both ranking in the top 10 among running backs in individual DVOA.

After a rocky summer filled with failed outside-zone runs, the ground game again has emerged as New England’s greatest offensive strength. The Patriots will need it to be until Jones returns, and this should be a favorable matchup for that group. They used a similar strategy to keep pace with Kansas City in 2020, getting a 17-carry, 100-yard effort from a then-unproven Harris, who was making his first career start.

3. Hit a big play or two
Hoyer didn’t play much last season, but when he did, he wasn’t afraid to attack downfield. He averaged a gaudy 20.6 yards per attempt across five garbage-time appearances (9-for-11, 227 yards, one touchdown, no interceptions, 149.1 passer rating) and connected on two heaves down the sideline to N’Keal Harry.

The sample size is small, but Hoyer has averaged 8.52 air yards per attempt since the start of the 2019 season, per Pro-Football-Reference. Only two NFL teams (Seattle and Baltimore) posted higher marks than that in 2021. The Patriots already have placed a greater emphasis this season on vertical passing and asking receivers to win 50-50 balls, and they don’t need to alter that approach with Hoyer behind center.

Don’t be surprised if we see a few deep shots to DeVante Parker — who broke out with five catches for 156 yards last week — especially if the Packers’ defense loads up to stop the run. Pressure will be on players like Parker, Nelson Agholor, Kendrick Bourne and tight ends Hunter Henry and Jonnu Smith to produce when called upon with top wideout Jakobi Meyers (knee) sidelined for the second straight game.

This big play also could come in the form of a defensive touchdown — those helped fuel the Patriots’ eight-game win streak last season — or an impact play on special teams, of which they’ve failed to generate many through three games.

4. Keep the point total low
This would have been a priority regardless of quarterback, as the Patriots are 0-7, including playoffs, during the Jones era when allowing 25-plus points. But it takes on even greater importance with Hoyer in charge. New England needs to make this game the kind of rock fight that Hoyer’s last start was until late in the second half. The Chiefs didn’t score their first touchdown until the final minute of the third quarter and managed just 19 total offensive points, with their final seven coming on a pick-six that bounced off Julian Edelman’s hands.

Green Bay’s offense is talented and efficient (ninth in DVOA), but it hasn’t been prolific this season, scoring seven points in Week 1, 27 in Week 2 and 14 in Week 3. Receivers Allen Lazard, Romeo Doubs and 32-year-old Randall Cobb don’t inspire the same fear as departed All-Pro Davante Adams, even if Rodgers remains one of the NFL’s elite passers. Perhaps the biggest challenge for New England will be stopping the Packers’ Aaron Jones- and A.J. Dillon-led rushing attack, especially if injured defensive tackle Lawrence Guy misses his first game since 2020 (and just the third of his six-year Patriots tenure).

An early deficit in this game could be fatal for the Patriots, so avoiding the slow starts that plagued them in many of their recent losses will be imperative. The Patriots fell behind 17-0 or worse in the first half in four of their last six defeats. Even with a healthy Jones, this team hasn’t proven capable of climbing out of a hole like that. With Hoyer, forget about it. 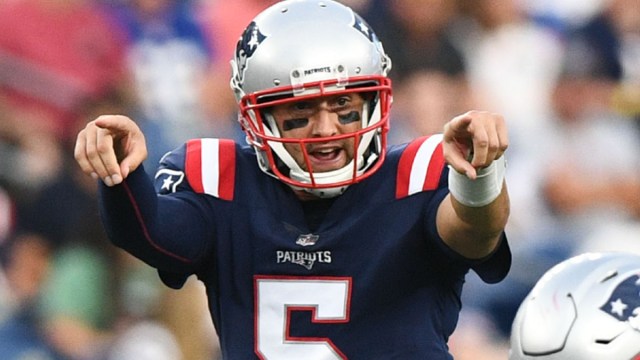 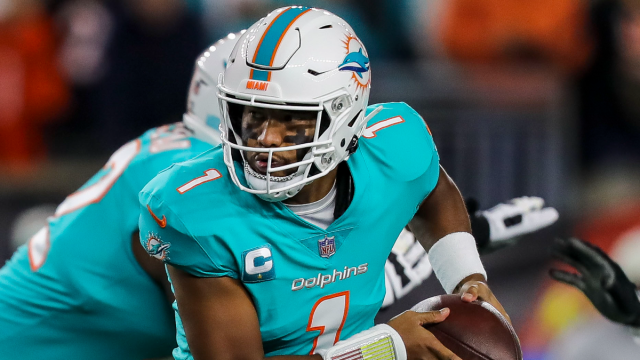