Remaining undefeated on home ice and the hottest team in the NHL through their first 18 games played, the Boston Bruins continued their historic early campaign, defeating the Chicago Blackhawks, 6-1, at TD Garden on Saturday.

However, the Bruins — now 11-0-0 at home — weren’t just skating for their historical start as a collective unit. Bruins captain Patrice Bergeron remains on the hunt for his 1,000th career point, getting just a tad closer following Boston’s NHL-leading 16th victory.

“It’s great,” Bergeron said, as seen on NESN’s postgame coverage. “I mean, obviously, I’ve been around for a long time. So, I’ve been lucky enough to play with a lot of great players and some successful team and I’ve gotta keep that going.”

The 37-year-old veteran finished the contest as the only Boston player to notch both a goal and an assist. Bergeron scored for the ninth time this season, netting a tally off an assist from Charlie McAvoy to put the Bruins ahead 2-0 in the second period while also notching his 999th career point in the process.

Yet, despite tallying six goals in total, it wasn’t all pretty for the Bruins. Winger Brad Marchand found himself on the unfortunate end of a collision with one Blackhawks player’s stick, which Bergeron played a fairly large role in. While the sequence resulted in Marchand laying on the ice for a few moments in pain, the veteran seized the opportunity to add comic relief to the situation after the game.

“I think Bergy’s mad at me,” Marchand said, as seen on NESN’s postgame coverage. “Missed a backdoor tap-in and he gave me a shot. I didn’t see the replay but what they said was that Bergy lifted the guys’ stick. … It happens.”

Marchand finished the night with a season-high three assists and recognized Bergeron’s milestone chase, which the Bruins tried to do their part in making Saturday the night in which he reached it.

“I don’t know, I might look him off next game now,” Marchand joked. “Obviously, we’re well aware of that coming up. You know, you could see we were looking for him there at the end of the game. We all wanna see him get that milestone so it’ll come at some point. We’ll be looking forward to that.”

The Bruins, winners of six consecutive games, will now head for the road, facing off against the Tampa Bay Lightning on Monday. Puck drop from Amalie Arena is scheduled for 7 p.m. ET, and you can watch the game, along with an hour of pregame coverage, live on NESN. 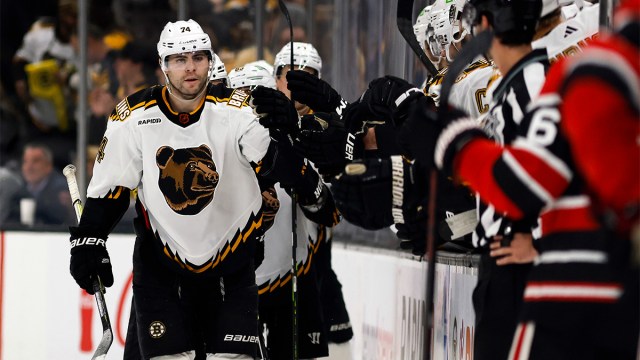 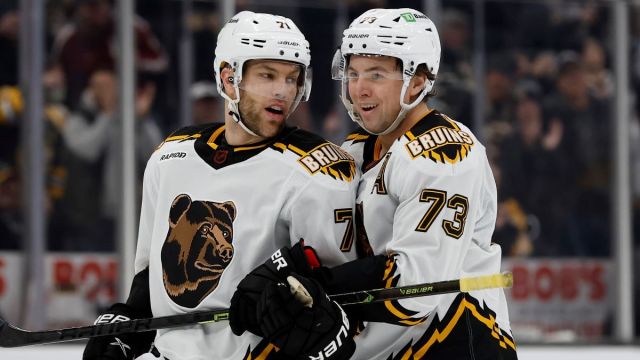