BOSTON — Boston Bruins forward Jake DeBrusk started to wonder if he was going to be forever stuck on career goal No. 99.

It didn’t help matters the 26-year-old had a tally wiped out after video review early in the second period in Saturday’s convincing 5-1 win over the Colorado Avalanche at TD Garden.

DeBrusk didn’t have to wait much longer to finally get over the hump, though, notching the elusive milestone goal — his eighth of the season — by putting home a rebound with 4:18 remaining in the final frame.

“It felt like a curse for a second there,” DeBrusk said. “Obviously, I guess the first milestone. But at the same time, here’s to 100 more or more than that. There are lots of cool things that happened this year to different guys already. It was just nice to score a goal. I feel like I hadn’t beaten a goalie in a while.”

DeBrusk admitted hitting the century career goal mark was secondary to contributing to a win, but it shows how far the winger has come, especially after an up-and-down campaign last season in which he initially asked to be traded out of Boston. Brad Marchand has seen growth out of his linemate, which has helped him become a factor on Boston’s top line.

“It’s good for him,” Marchand said. “I think he was kind of pressing a little bit on that. Sometimes those milestone goals can weigh on you a little bit. He’s taken a step this year. His consistency is much better than it’s been in the past, which is what we need. He’s probably one of the most talented kids that I’ve played with. You know his thing is work ethic and when he combines those two things he is a great player for our group and he has been this year.”

With DeBrusk finally breathing a sigh of relief after getting goal No. 100, the achievement also came with a light-hearted moment.

When speaking with reporters following the contest, DeBrusk was informed that his father, Louie, scored 24 goals during his 11-year NHL career. DeBrusk had some fun with the son holding the upper hand on the dad in this situation.

“I don’t know (what he would say to me), actually. Probably I told you so, or should have listened to me more, maybe,” DeBrusk said. “Twenty-four, hey, I didn’t know that’s what it actually was. So, I beat him in one season of mine. But one thing I’ll never get on him is PIMS (penalty minutes) and if I said that to his face I might be scared a little bit. He’s definitely got the size intimidation, so I don’t really chirp him too much. 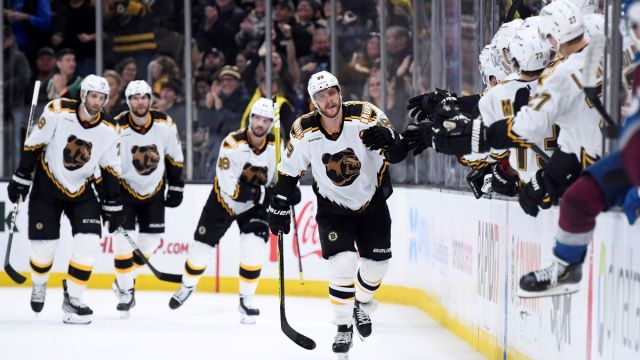 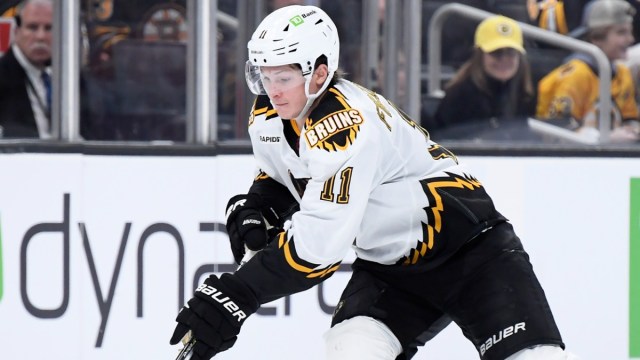