Hiring Bill O’Brien should provide a major boost to the Patriots’ offense, but will it derail their potential pursuit of one of the NFL’s top receivers?

Five-time Pro Bowler DeAndre Hopkins has been mentioned as a possible trade target for New England, which has lacked elite pass-catching talent in recent years. The Arizona Cardinals reportedly will look to move Hopkins this offseason, and Bill Belichick is a massive fan of the veteran wideout.

But Hopkins has history with O’Brien, whom the Patriots reportedly hired Tuesday as their new offensive coordinator. He played for O’Brien for six seasons with the Houston Texans. Although he emerged as one of the league’s most prolific receivers during that stretch, Hopkins told Sports Illustrated after his 2020 trade to Arizona that he had “no relationship” with the former Texans head coach and wanted out of Houston.

To the rest of a football-obsessed world, the idea that any team would unload an elite player in his prime — let alone one who had never carried a diva label, proposed to a kicking net or ripped his quarterback (even with the uncertainty under center that preceded (Deshaun) Watson) — seemed ludicrous. But the trade that shocked the rest of the NFL came as no surprise to Hopkins. …

Anyone who knew Hopkins, his story and his relationship with O?Brien would understand, he thought. … What Hopkins knew was, “that asking for a little raise would lead to the outcome that I got,” he says, “which is the outcome that I wanted.”

Hopkins has a no-trade clause in his Cardinals contract, so if he has no desire to reunite with O’Brien, he could veto a potential Patriots trade offer. But an executive for an NFC team believes a Pats-Hopkins deal still is possible.

“That would be interesting to pair Bill O’Brien with Hopkins if O’Brien ends up with the Patriots OC job,” the executive told ESPN’s Jeremy Fowler this week. “They might not be friendly. But they had success together with subpar quarterback play, so maybe it can work.”

It’s not clear whether the Patriots would be willing to trade for Hopkins and take on his $19.4 million salary, but Belichick didn’t hide his admiration for the soon-to-be 31-year-old this season. Before the Patriots visited the Cardinals in December, the head coach compared Hopkins to Hall of Famer Cris Carter and said he’s “every bit as good as anybody I?ve ever coached against.”

“He’s got tremendous ball skills,” Belichick said. “He catches everything, has great hands, and he’s long so he’s never covered. Even if he’s covered, there’s a place where the ball can be that he can get it and still make the catch. Great coordination on the sidelines, and he doesn’t really look it, but he’s a strong kid. You see him break tackles. He’s a strong kid in terms of creating separation on routes, yards after contact, you know, tough yards like around the goal line or that extra yard for a first down type of thing.

“He’s a very smart football player, very savvy. But his ball skills are at the very elite level with guys that I’ve seen in this league. He’s up there with whoever the top guys are, the Cris Carters of the world and guys like that.”

Belichick later praised Hopkins in person during their game at State Farm Stadium, with Hopkins reciprocating.

Hopkins tallied 717 receiving yards this season despite missing the first six games due to a PED suspension. That total would have ranked second among Patriots pass-catchers behind Jakobi Meyers (804). His 64 receptions would have put him third behind Rhamondre Stevenson and Meyers, who both played at least five more games. He ranked fourth among all qualified receivers in catches per game and 10th in yards per game.

If he and O’Brien can settle their differences, Hopkins would be a huge addition to New England’s receiving corps, giving quarterback Mac Jones a true No. 1 wideout for the first time in his pro career. The Patriots currently have just DeVante Parker, Kendrick Bourne, 2022 second-round pick Tyquan Thornton and practice squadder Tre Nixon under contract for next season, with Meyers and Nelson Agholor both set to hit free agency.

If the Patriots do intend to pursue a pass-catcher of Hopkins’ caliber this offseason, the trade market is their only available avenue. Meyers and JuJu Smith-Schuster are the headliners of a weak free-agent class that features no game-breaking wideouts.

It’s worth noting the Patriots now have a direct connection to Arizona’s front office through new Cardinals general manager Monti Ossenfort, who worked in New England’s scouting department for 15 seasons. That link could help facilitate a potential Hopkins swap. 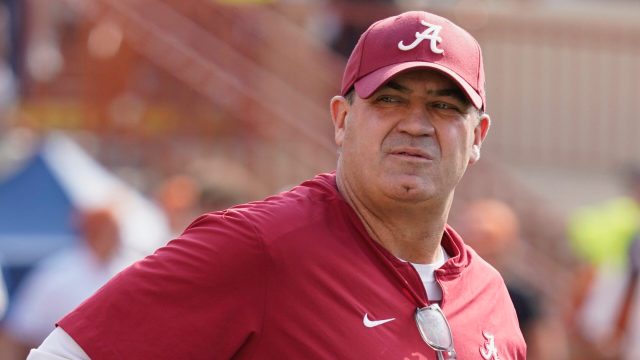 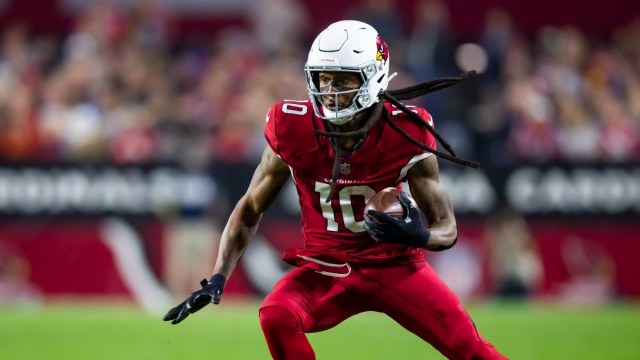