The Golden State Warriors return home to face the Cleveland Cavaliers in Game 5 of the NBA Finals on Monday night as 9-point betting favorites at sportsbooks monitored by OddsShark.com.

The Warriors are just one win away from their second NBA championship in three years, but Cleveland’s decisive 137-116 victory as a 5-point home underdog in Game 4 has cut Golden State’s series lead to 3-1 going into Monday night’s Cavaliers vs. Warriors betting matchup at Oracle Arena.

Golden State now has a 3-1 series lead in the NBA Finals for a second consecutive year but will be looking to avoid a repeat of last year’s nightmare, when three straight Warriors losses earned the Cavaliers their first NBA crown in franchise history.

Most trends point to an eventual series win by the Warriors. Golden State’s loss Friday night marked its first straight-up defeat in 17 games. The Warriors haven’t dropped four straight games since February and March in 2013.

The Warriors also are a spectacular 28-2 SU in their past 30 home dates and 44-5 SU for the season. But they have struggled at times to cover as home chalk, going 10-10-2 against the spread in their past 22 overall and 4-4 ATS in eight postseason contests.

On the whole, Golden State has performed well at home when the Cavaliers come to visit, going 9-3 SU and 8-4 ATS over their past 12 meetings at Oracle Arena, according to the OddsShark NBA Database. But all three SU losses came in postseason clashes.

The Cavaliers enter Game 5 with a mountain to climb. No team ever has overcome a 3-0 deficit to win an NBA playoff series, a sober reality that leaves Cleveland as a distant underdog to win the series.

Cleveland is unbeaten in its past three Game 5 appearances, including a 112-97 win in last year’s NBA Finals Game 5, avoiding elimination while pegged as 5.5-point road underdogs and spurring a comeback that ended with a championship victory on the road in Game 7.

However, the Cavaliers will need to overcome occasional offensive struggles in recent visits to Golden State, where they have failed to crack 100 points in five of their past seven postseason matchups. 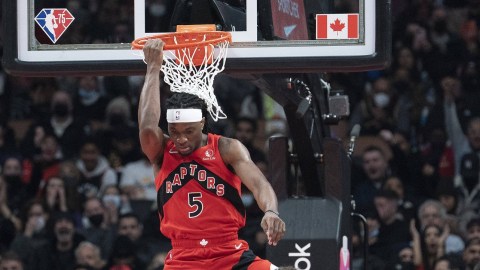