By some measures, Chase Elliott is in a tenuous position heading into an elimination race in the NASCAR playoffs this weekend.

Yet there’s reason to believe everything we know about the NASCAR Cup championship chase could shift Sunday.

Heading into the final Round of 12 race at the Charlotte ROVAL, Elliott sits in seventh place in the standings, with a slight nine-point cushion above the cutoff. (The top eight drivers will advance to the next round.) His competition is stiff, too; he’s competing with former champions Kyle Busch and Kevin Harvick, both of whom he’s had run-ins with in the past.

So are Elliott’s championship hopes on life support? Far from it.

Not surprisingly, the Hendrick Motorsports driver is the easy betting favorite for Sunday’s race at +220 to win, according to DraftKings Sportsbook. He’s also in strong position to earn a top-three finish (-240) and a top-five (-450).

Having won the last two races at the ROVAL and having finished no worse than fourth in nine of the last 10 road-course races, it’s not difficult to picture Elliott taking the checkered flag and receiving the automatic berth into the next round that comes with it.

Sportsbooks clearly recognize that Elliott isn’t out of the hunt. He retains the third-strongest odds to take the 2021 Cup title at +600, trailing only Kyle Larson and Denny Hamlin.

Remember, Elliott was in an even more tenuous position a year ago, staring at a win-or-go-home deficit heading into the Round of 8 cutoff. He won that race, at Martinsville Speedway, which propelled him to his first Cup championship.

In other words, while there’s still anything resembling favorable odds for an Elliott championship, now might be the time to strike. 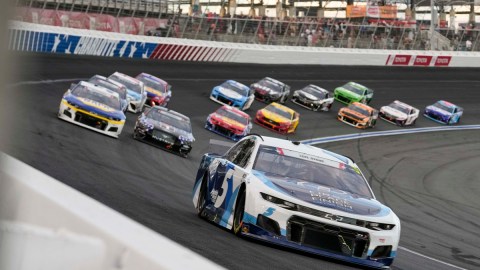