Dallas Cowboys quarterback Dak Prescott threw for the most yards ever against a Bill Belichick-led defense during a Week 6 win over the New England Patriots. That production had plenty of fantasy football impact, as well, as Prescott finished as QB2 behind only Minnesota Vikings quarterback Kirk Cousins.

Fantasy football owners who had either of those signal-callers obviously were in a favorable spot while managers of Los Angeles Chargers QB Justin Herbert — a winner last week! — could be headed toward a loss given his performance.

Anyway, here is our latest rundown of winners, losers and surprises from Week 6 of the fantasy football season. Of note, all data and statistics included are based on full-point PPR scoring and according to SportRadar.

Winners
CeeDee Lamb, WR, Dallas Cowboys
The Cowboys receiver scored double-digit points in three of his five contests entering Week 6, but put together his best fantasy performance of the season against the Patriots. Lamb, who entered the slate as Yahoo’s WR15, was the highest-scoring player at the position ahead of “Monday Night Football.” Lamb more than doubled his projection behind 14 yards per target and a league-best seven receptions of 10 yards or more. His 10 touches from scrimmage (3.61 points per touch) were second behind only Adam Thielen. Lamb finished with nine catches for 149 yards and two touchdowns — including the game-winner.

J.D. McKissic, RB, Washington Football Team
McKissic, who entered Week 6 as Yahoo’s RB34, concluded as the 12th-highest scoring player at the position ahead of Ezekiel Elliott, De’Andre Swift and Chuba Hubbard, just to name a few. McKissic’s 1.19 points per touch (16 touches) ranked higher than running back Leonard Fournette, who led the league in points scored this week. The pass-catching back, who was owned in 42% of Yahoo leagues, was crucial in the receiving game (1.45 points per target, 10 targets) with a team-high 65 yards through the air.

Losers
Austin Ekeler, RB, Los Angeles Chargers
It wasn’t a banner day for the LA offense, and Ekeler was among those representing the high-flying Chargers that had down performances. The Chargers dual-threat back, who entered as Yahoo’s RB2 ahead of a matchup with the Ravens, concluded 27 spots behind that in total scoring and failed to record 50% of his projection. Ekeler saw just 10 touches and was limited to seven yards on the ground with two negative rushing attempts and run stuffs on 33% of his carries.

Lamar Jackson, QB, Baltimore Ravens
It was a bizarrely pedestrian day for Jackson all while his Ravens claimed a very noteworthy win over the Chargers. Jackson, who entered as Yahoo’s QB3, finished 16 spots behind in scoring with signal-callers Tua Tagovailoa, Teddy Bridgewater, Sam Darnold and Mac Jones, to name a few, finishing ahead of him. The dual-threat Jackson was QB19 in regards to total yards (218) and QB20 in net pass yards per drop back (4.67 yards). He completed just 25% of his passes of 20 or more air yards with two “big completions” and two interceptions.

Surprises
Donovan Peoples-Jones, WR, Cleveland Browns
The Browns receiver, who was owned in just 2% of Yahoo leagues and was not ranked on the site’s list of 64 wideouts entering Week 6, recorded the fifth-most points of any player at the position. Peoples-Jones ranked fourth in points per target among all wideouts (6.53 points on four touches), but was second among receivers with two or more touches. Only DeAndre Hopkins (6.83 on three touches) ranked higher. His 105 yards after the catch (!!) was first, as well, and he more than quadrupled his projection.

Noah Fant, TE, Denver Broncos
The Week 6 contest between the Broncos and Raiders featured one of the best tight ends in fantasy football with Darren Waller, but it was actually Fant who came away with the better individual day. The Broncos tight end, who was TE9 entering the week, ranked first among players at the position ahead of Monday night. Fant recorded the most touches of any tight end (nine) and tallied 2.74 points per touch. He more than doubled his projected point total while scoring as much in Week 6 as he did in Weeks 3, 4, and 5 combined. 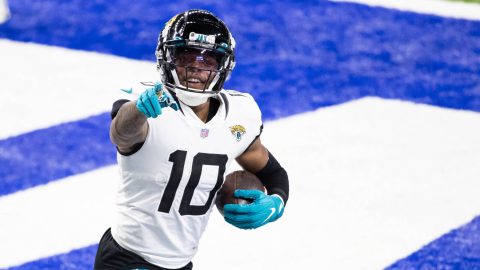