The betting public has indicated there’s one play more popular than others when it comes to placing a wager on Wednesday’s Game 5 of the Eastern Conference finals between the Boston Celtics and Miami Heat at FTX Arena.

And it comes on the total, which currently sits either over/under 203.5 or 204 depending on which sportsbook you’re using. The Game 5 Over is responsible for the most bets and most handle in comparison to any side or moneyline bet ahead of the pivotal clash.

BetMGM revealed Wednesday morning that 88% of the handle and 82% of bets the sportsbook has received is on Over 203.5. DraftKings Sportsbook, similarly, has received 84% of the money and 80% of bets on Over 204, according to a release Wednesday afternoon. Those are some clear numbers. 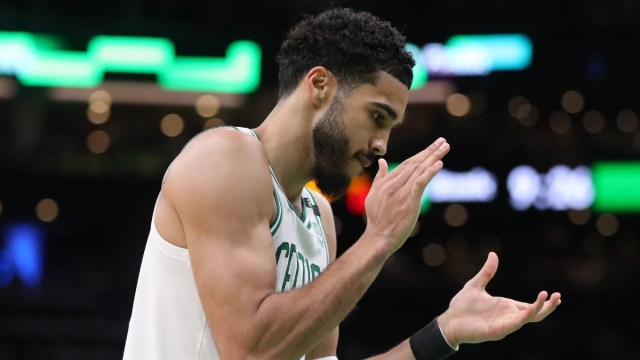 Celtics Odds: Why You Should Be Confident In Road Favorite For Game 5
Odds May 24

The total has been, and seemingly will continue to be, a storyline throughout the best-of-seven series. Miami and Boston entered the conference finals as two of the most profitable teams on the Under. That was then met with three consecutive Overs, each ticking up a bit more than the last.

Of course, just when bettors started getting comfortable with that trend, Boston limited Miami to one point through the opening seven minutes in Game 4 en route to an easy win for Under bettors — and there was a ton of money on the Under.

BetMGM’s John Ewing offered a helpful trend when presenting the Game 5 total. Ewing shared how in the past five postseasons there have been 12 playoff games with totals of 204 or fewer points. The Over has cashed in 66% of those contests (8-4).

The Celtics, currently a two-point road favorite, will look to claim a crucial verdict Wednesday with their sights then able to shift to Boston for Game 6. Tipoff is scheduled for 8:30 p.m. ET.