After an unforgettable week at the U.S. Open, the PGA Tour is staying in New England, setting up shop just outside of Hartford for the Travelers Championship.

Despite the Travelers falling the week after arguably the toughest test on the entire schedule, it has become one of the most popular stops among Tour players. Just last year, a star-studded field invaded Cromwell, Conn., one week after the 2021 U.S. Open … at Torrey Pines in California.

The commute is far more manageable this year with the short trip from Boston to Hartford. As such, it’s another strong field at TPC River Highlands.

Here are some quick picks for this week’s Travelers Championship with betting lines from DraftKings Sportsbook.

Favorite to back: Sungjae Im (+2800) — We’re looking for value here, so we’ve gone a little farther down the board beyond the likes of Scottie Scheffler, Justin Thomas or Rory McIlroy. Last week’s missed cut was disappointing for Im, but he had been quite solid since the Masters where he nabbed a top-10 finish. After a bit of a slump to open the season, Im is back to being one of the better ball-strikers on Tour, and he’s remarkably accurate off the tee despite some solid length. His putting is still a question mark, but he had one of the best putting weekends of his career here in 2019, so a big week on the greens isn’t out of the question.

Favorite to fade: Jordan Spieth (+2000) — Spieth has struggled with finding the fairway (129th in driving accuracy), and his putting continues to be an issue. To have success at the Travelers, you typically need to check at least one of those two boxes. Yes, he won the event when he holed out from the bunker in 2017, but in three starts since then, he’s finished no better than 42nd, including a missed cut. At this point, Spieth’s focus is probably on just getting his game together for the Open Championship at St. Andrew’s next month.

First-round leader: Joel Dahmen (+8000) — He’s far from the most consistent player on Tour, but even the self-deprecating Dahmen should have confidence after a stellar showing at Brookline. He faded a bit on the weekend, but Dahmen was in the final grouping to begin the day Saturday en route to a top-10 finish. He has broken 70 in four of his last six first rounds, including just missing a first-round leader cash at the Wells Fargo where he shot an opening-round 64. He did that on another TPC course (Potomac), a track that is most similar to TPC River Highlands, per DataGolf’s course fit tool.

Long shot to watch: Brendon Todd (+8000): It’s a bit of a horse for the course situation for Todd, who has three top-30 finishes here in his last four starts. When he gets hot, he can go super-low, too, as evidenced by the 61 he shot during the 2020 tournament. His ball-striking has really come around in the last few months, gaining 3.8 strokes on the field on approach at the Canadian Open (where he finished 13th), and he’s still one of the best putters on Tour. He has two top-10 finishes since April, so he’s been sniffing around. If he sustains the approach game and gets another monster week with the putter, he’ll be in the mix at a course he definitely feels comfortable. 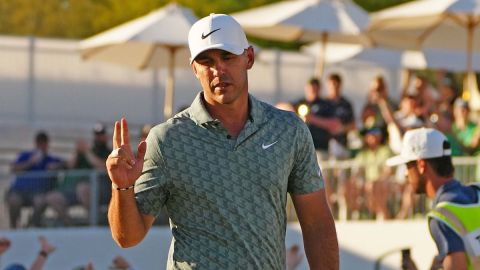