Patriots Could Take Pass Rusher, Linebacker in 2013 NFL Draft Based on Past Team History (Podcast) - NESN.com Skip to content The NFL draft is right around the corner, and as usual, Patriots fans are desperately trying to figure out what the team will do in the first round.

The Patriots could take a number of different routes this year with the No. 29 pick. They could trade down like many expect them to, they could trade up and surprise everyone for the second year in a row, they could draft a wide receiver or cornerback to fill immediate needs or they could look to the future and draft a pass rusher or linebacker. Or, of course, there’s a fifth option, and Bill Belichick could shock everyone with his selection — though we suspect some New Englanders will revolt if a running back or tight end comes off the board first for the Patriots.

If New England takes a linebacker or pass rusher, it means they’re looking toward the future. Current starters Brandon Spikes and Rob Ninkovich are both free agents in 2014. And if the team signs a veteran defensive end, it will likely be on a one-year deal or a contract that would be easy to get out of after 2013 because of guaranteed money and signing bonuses.

There are a number of players at those two positions the team has shown interest in. The Patriots have worked out Kansas State linebacker Arthur Brown and defensive ends Ezekiel Ansah out of BYU, Dion Jordan out of Oregon, Florida State’s Tank Carradine and UCLA product Datone Jones. There also seems to be a lot of smoke around the Patriots and SMU’s Margus Hunt.

On this week’s Gunslingers Podcast, NESN’s Luke Hughes and Doug Kyed discuss what the Patriots may do with the No. 29 pick. They also discuss this year’s quarterback class and how the Top 10 picks may shake out.

Listen in below or download the podcast on iTunes for all the latest on the Patriots and the NFL. 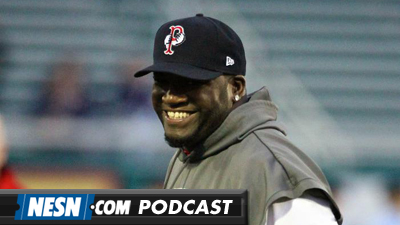 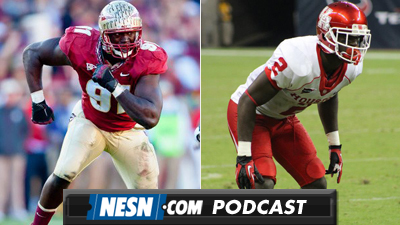 Patriots Could Trade Out of First Round If Perfect Pass Rusher, Cornerback Is Not There at No. 29 (Podcast)