The excitement of NFL free agency has died down considerably, most pro days for top prospects already have happened and offseason workouts still are a few weeks away.

We’re in a bit of a lull for football news, but with the 2016 NFL Draft less than one month away, it’s time for some fresh first-round predictions.

Let’s take a look at our NFL Mock Draft version 7.0.

1. Tennessee Titans (3-13): Jalen Ramsey, DB, Florida State
The Titans have so many needs, and even though Laremy Tunsil is the consensus choice at No. 1, Ramsey has the potential to be an elite cornerback for a long time in Tennessee. It’s a position the Titans must bolster, too, especially with the NFL becoming a pass-first league.

Ramsey’s athleticism and coverage skills would allow him to step in and be a starter as a rookie.

Elliott is an explosive running back with good speed and lateral quickness and above-average strength. He ran for more than 1,800 yards and at least 18 touchdowns in each of his last two seasons at Ohio State.

9. Tampa Bay Buccaneers (6-10): Jarran Reed, DT, Alabama
10. New York Giants (6-10): DeForest Buckner, DE, Oregon
11. Chicago Bears (6-10): Vernon Hargreaves, CB, Florida
12. New Orleans Saints (7-9): Laquon Treadwell, WR, Ole Miss
The Saints need a lot of help on defense, but Treadwell is the best wide receiver in this draft and could be the best player available at this stage of Round 1. He would make an excellent 1-2 punch alongside rising star wideout Brandin Cooks as a solid route runner with good hands and enough speed to stretch the field. Treadwell caught 82 passes for 1,153 yards and 11 touchdowns for Ole Miss last season.

13. Miami Dolphins (6-10): Shaq Lawson, DE, Clemson
The Dolphins didn’t have much of a pass rush last season. Twenty-four of the league’s 32 teams had more sacks, and Miami gave up the fifth-most yards per pass attempt at 7.8 yards. Selecting a player of Lawson’s caliber would give the Dolphins’ defensive line some much-needed speed and quickness off the edge, as well as another player disciplined enough to stop the run. Lawson had 11 sacks for the Tigers last season and was a key reason why they advanced to the BCS national championship game.

Lynch has most of the physical tools to be a successful pro quarterback, including a powerful arm and a strong frame at 6-foot-7 and 244 pounds. His athleticism is impressive, too. It helps him escape the rush and throw on the run.

Lynch’s accuracy is not outstanding, but playing in a Denver offense with two top-tier receivers in Demaryius Thomas and Emmanuel Sanders would help alleviate that concern.

The New England Patriots lost their first-round pick as the NFL’s punishment over Deflategate. 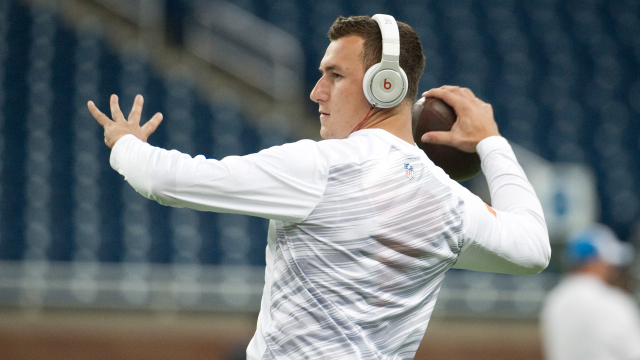