Pau Gasol Partakes in Some Wild Stretching Routine Before Losing to Celtics - NESN.com Skip to content Pau Gasol, what is your deal, man?

You hit seemingly every shot you take, you play some good defense and some great team basketball, but why is it so hard to like you?

Is it the scraggly beard and long hair? No, that look has been celebrated pretty wildly in Boston before.

It’s more likely the flopping — nobody likes a flopper — but there is one thing that nobody can take away from you, and that’s your awesome stretching routines. I’m pretty sure that device you’ve got strapped to your legs is illegal in 15 states, by the way. “[Glen Davis] didn’t even notice. We’re like Shrek and Donkey — best friends. They can’t separate us.”
—Nate Robinson, referring to his leap onto the back of Big Baby in Game 4 of the NBA Finals

Who knew that NESN.com could bring about such an official ruling on Michael Jordan‘s suspect mustache?

“Here is the opinion of the American Mustache Institute on this, which, in essence, is the only opinion that matters. Indeed, there has been much debate about Mr. Jordan’s revival of the ‘toothbrush’ mustache — or the street name, the ‘dictator’ — but AMI believes there is no such thing as a ‘bad’ mustache, and maybe the time has come for a rebirth. Carry on. Dr. Abraham Jonas Froman Chief Executive Officer The American Mustache Institute 877-STACHE-1
–Dr. Abraham Jonas Froman 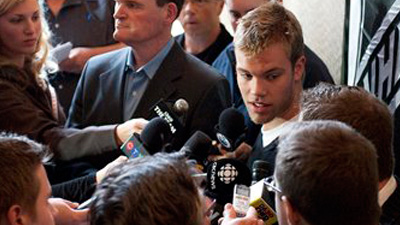