Words are just words, so when everyone starts saying that Adrian Gonzalez has "the perfect swing for Fenway Park," it's easy to see it as being nothing more than cliche.

A little look at his hit chart from his 79 games at Petco Park last season, though, helps bring it to life.

Gonzalez batted .279 with 11 homers, 12 doubles and 42 RBIs at Petco, a known pitcher's ballpark for its massive outfield expanse.

Using MLB.com's hit chart and placing his deep flyouts at Petco in the much friendlier confines of Fenway Park, you'll see at least nine outs that would have been homers or extra bases at Fenway: In the image, each red dot represents a flyout that Gonzalez hit at Petco Park, so clearly, he's going to love the Green Monster being so close, even if it is 37 feet high.

Of course, with the wall being as high as it is, some of those hits may be laser-beam singles, others may be wall-scraping doubles and still others might be moonshot homers.

In our theoretical world, Gonzalez's home average would've jumped from .279 to .307, with at least five homers added on to those 11 that he hit last year.

It looks like Gonzalez will indeed be bringing the right swing with him to Fenway Park. 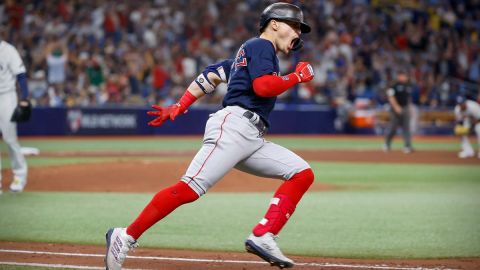