After a phone hearing on Wednesday, the NHL has decided that there will be no further punishment issued to Bruins captain Zdeno Chara.

The decision was made by the NHL's vice president of operations, Mike Murphy.

"After a thorough review of the video, I can find no basis to impose supplemental discipline," Murphy said in a league statement. "This hit resulted from a play that evolved and then happened very quickly — with both players skating in the same direction and with Chara attempting to angle his opponent into the boards. I could not find any evidence to suggest that, beyond this being a correct call for interference, that Chara targeted the head of his opponent, left his feet or delivered the check in any other manner that could be deemed to be dangerous.

"This was a hockey play that resulted in an injury because of the player colliding with the stanchion and then the ice surface," Murphy added. "In reviewing this play, I also took into consideration that Chara has not been involved in a supplemental discipline incident during his 13-year NHL career."

Chara was assessed a five-minute major penalty and a game misconduct late in the second period on Tuesday night when he hit Max Pacioretty into the glass at the end of the Boston bench. Pacioretty lay on the ice for several minutes before being taken off the ice by stretcher. He sustained a severe concussion and a fractured vertebrae as a result of the hit.

Chara's hearing was presided over by Murphy because Colin Campbell does not make decisions regarding the team for which his son plays. 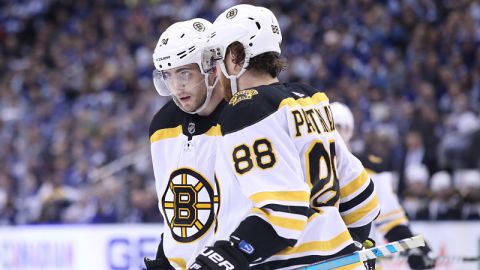