Daniel Bard Proves He Deserves Some Patience as Starter Even If Results in First Start 'Stunk' - NESN.com Skip to content Professional baseball, at the end of the day, is about the results or the product. However, success in baseball ultimately stems from paying attention to the process, not necessarily the product.

That's exactly where we find ourselves after Daniel Bard's first major league start on Tuesday night in Toronto. The line — five-plus innings, eight hits, five runs and a walk —  certainly wasn't pretty, and the Red Sox obviously aren't going to be happy with their fourth loss in fifth games.

It may not be what Red Sox fans wanted to see strictly in terms of result, but there were plenty of positives to take from the start. The slow start has made the immediate need for wins seem monumental, but in reality, the season is in its infancy, as is Bard's career as a starter.

It's a process, and it's a process that deserves patience. Bard showed that much on Tuesday night. There were more than enough positives to take from the former reliever's first start.

Nobody wants to make or hear excuses, especially during a week like the Red Sox have had, but Bard was the recipient of some bad luck. You don't need a stat like BABIP to tell you that, either. Those types of things tend to even themselves out — no one is lucky or unlucky for an extended period of time — but for one night, Bard was unlucky.

"It's easy to look at results," he told reporters after the game. "I think if you can look past that, I was just going through it in my head — I think roughly six or seven hits [were ground ball hits]. Say half of those gets fielded, which is probably a normal night, say we catch three or four of those and get outs on them, that's three runs and 30 pitches, and I'm probably pitching into the seventh, giving up two runs. It's a totally different game.

"The results obviously stunk. I recognize that and I'm frustrated with it. But I wouldn't change the way I threw."

That's not to say that there weren't any issues, either. Bard did make some poor pitches, particularly in his 28-pitch third inning, an inning that is probably the main reason he wasn't able to work later into the game. The back-breaker in the third inning came when Bard surrendered an 0-2 single to Adam Lind that brought around two runs. Giving up hits on 0-2 is bad enough, but it's made even worse when you groove a belt-high fastball to the opposition's cleanup hitter. That was a hit that will never be fielded, even on a "lucky" night.

In fact, five of the eight hits that Bard gave up, as well as a walk of Edwin Encarnacion, came with two strikes. One of the signs of a polished pitcher, especially a starter, is the ability to not only finish innings, but finish at-bats. That will be one of the next steps in the progression that the Sox will need to see out of Bard.

But ultimately, you could see the potential there on Tuesday in Toronto. There has never been denying the filthiness of Bard's stuff. Most pitchers would kill to have a fastball or a slider like Bard has, let alone both. His changeup is even coming along nicely. He didn't feature that third pitch much in his first time through the lineup, but he ended up throwing 12 changeups for his start. He's going to need to feature that more as he continues to evolve as a starter, and he's going to have to throw it for strikes more consistently, but it certainly has the potential to be another out pitch for the young flamethrower.

All night, Bard showed the ability to get swings and misses, something he's always been able to do. Of his 96 pitches, 18 went as swinging strikes, good for almost 20 percent. Four of his six strikeouts were of the swinging variety.

He also gave every indication with the way he pitched that he's more than ready to work deep into games. With his pitch count nearing 100 in the sixth inning, Bard was still working in the mid-90s on the radar gun before getting the hook from Bobby Valentine.

These are the types of things that provide hope going forward and validate what we already knew: Daniel Bard is a very, very good pitcher.

It might not have been the kind of debut that Bard wanted, at least not in terms of results. For now, however, it's not entirely about about the results. Focusing on and improving the process is going to be what ultimately helps Bard become a very, very good starting pitcher. 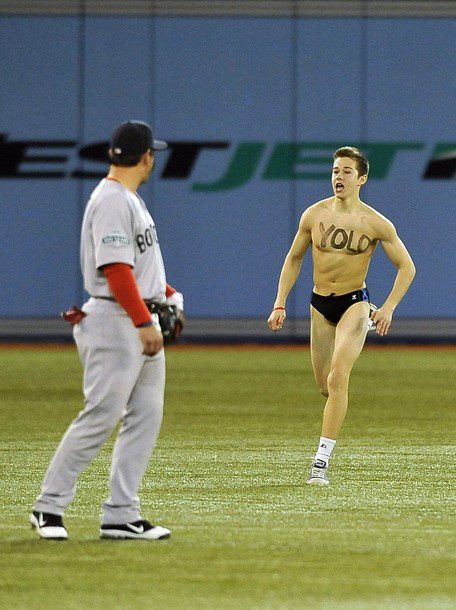