The most pessimistic Patriots fans will likely still be grousing about the latest playoff loss (or talking about trading Tom Brady) when the team is suiting up for its first official game in September 2013. But if you’re among the more optimistic members of Patriots Nation (those who have no interest in trading Brady), there are plenty of reasons to be excited for next season.

Typically, teams have to wait for the NFL draft or at least free agency to look forward to seeing new faces on the field, but New England has multiple players who could play a major role in the Patriots’ future already signed to contracts.

Among these “redshirt” players are running back/track star Jeff Demps, guard/tackle Marcus Zusevics, defensive end/linebacker Jason Vega, tight end Jake Ballard and defensive tackle Armond Armstead. Add in linebacker Dane Fletcher, who got injured just minutes into the Patriots’ preseason opener, and the Patriots have six players that didn’t play a single snap during the 2012 regular season who could contribute in 2013.

The player who may offer the most upside and fills the biggest need is CFL import Armstead. The 6-foot-5, 298-pound lineman missed all of his 2011 junior season with USC after suffering a heart attack before the season. Armstead was medically cleared by multiple teams before the draft, but he still wasn’t taken. Instead of trying to find his way onto a training camp roster, he signed with the CFL’s Toronto Argonauts and pulled down six sacks and CFL All-Star honors.

Armstead projects as a three-technique, pass-rushing defensive tackle in the NFL. Last season, the Patriots had Kyle Love and Vince Wilfork share that role earlier in the season before pushing Wilfork to nose tackle and bringing Brandon Deaderick off the bench as a starter. The Patriots’ defense looked better with Deaderick in that role, but he still wasn’t getting after the quarterback much.

On third down, New England had defensive ends Jermaine Cunningham and Justin Francis in that three-technique defensive tackle role. Both players are undersized for the position, but were still able to churn out some pass-rushing production, although not much — Francis pressured the quarterback in 8.5 percent of his snaps and Francis in 7.0 percent. Much of that production came at defensive end, though, where it’s easier to rush the passer.

The Patriots haven’t had a solid interior lineman who could get after the quarterback since Myron Pryor and Albert Haynesworth were in that role early in 2011. In limited snaps, Pryor and Haynesworth got after the passer in 17.6 percent and 9.3 percent of their pass-rush snaps — all inside.

Pryor can’t stay healthy, though, and Haynesworth’s lack of consistent effort got him booted from the team. The Patriots need pass rushing help all over their front seven, but having a player who can get after the quarterback from the inside would be a major help.

The Patriots tried to fill that need last season with Jonathan Fanene, but injuries forced the Patriots to cut him prior to the season. Losing Mike Wright to concussion complications after 2011 hurt as well. He was among the best situational interior pass rushers in the league.

Armstead could be that player that they have sorely lacked the past few years. The former Trojan is fast for his size and offers impressive lateral quickness. He’ll have to prove that he can be a solid contributor against the run and pass to carve out a starting role next to Wilfork, but even if he can only help out as a pass rusher, he should be solid contributor on third down.

Armstead’s former general manager up in the Great White North categorized the defensive tackle as a major steal for New England.

“I don?t think it?s very often where an NFL team can get a first-round pick without using a first-round pick,” Toronto general manager Jim Barker told ESPN.com. “When he came up, about the second or third day of training camp, I told somebody on our coaching staff ?this guy is going to be the highest paid guy out of Canada ever.?”

Armstead received a three-year deal from the Patriots worth $1.485 million. The contract includes $655,000 worth of guaranteed money, which means his entire 2013 salary is on the books for New England.

Obviously there are risks with Armstead, or else he wouldn’t have been available to the Patriots at this point in the season. But Bill Belichick has been willing to take risks on players in the past, and many have paid off, including Alfonzo Dennard, who the Patriots grabbed in the seventh round of the 2012 NFL draft after he encountered legal problems just days before. Dennard was one of the best rookie corners in the league last year.

Dennard could be looked at as the steal of the 2012 draft, but if Armstead can stay healthy, he could actually surpass his new teammate. 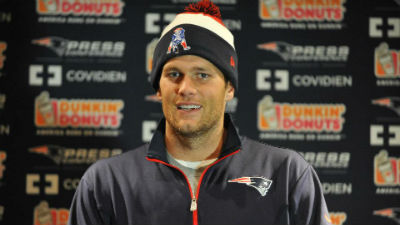