BOSTON — They could have called it a night after the national anthem and no one would have cared.

The Bruins returned home Wednesday night to TD Garden where they played their first game since Monday’s attacks on the Boston Marathon. It turned out to be a night that won’t soon be forgotten by all of those in attendance.

What will obviously be the lasting memory won’t be that the Bruins lost 3-2 in a shootout to the Buffalo Sabres. The thing all of us will remember instead came before they even dropped that puck. Hockey took a backseat to the more important tasks at hand, which was just getting back to some sort of normalcy.

Before that attempt could be made — it’s just a step in what’s going to be a very long process — we had to look back. The Bruins led that charge in what turned out to be a wonderful pregame ceremony. It was understated at times. Gone was the blaring rock music that accompanied the team onto the ice following a video montage with goals, saves, hits and fights. Instead, with a yellow light shining on the sheet, the Bruins quietly took the ice.

The noise, however, quickly followed.  Surely and swiftly, the sellout crowd of 17,565 stood as one. They didn’t stand just as one gathering of Bruins fans, but they stood as Bostonians. They stood as a city, really, knowing full well of the impact this would have on the ongoing healing efforts.

Then there was the touching video montage looking back at Monday’s events, looking back at not only the tragic, horrifying and heartbreaking events of Monday, but also at the courage and bravery bred out of those despicable acts.

Then came the main event. Rene Rancourt, known for his boisterous voice and flare for the dramatic as one of the best-known anthem singers in the game, took center stage. Surely he would give his best efforts, said everyone. He did that, but he did so by singing just a few lines of the Star Spangled Banner.

That?s when that same sellout crowd took over, belting out the words as one in an attempt to show not only those responsible for the attacks, but the rest of the world, that this city can’t be held down.

It was an incredible moment, one that left even the toughest of men in the building a little teary-eyed, and that includes the Bruins.

“It was tough to keep a dry eye after the memorial on the big screen,” implanted Bostonian Shawn Thornton said after the game. “To hear the crowd singing like that, it’s pretty special. I think that if that doesn’t get you going, nothing will. … It was definitely a different experience, but good to see everyone rally around each other.”

Thornton was far from alone in feeling touched by what he had seen. There’s no denying that this group of Bruins players feels a special connection to the city. They’re Bostonians themselves, an easy transition to make in a city that is so welcoming to its sports stars.

“It’s an emotional thing seeing that,” Chris Kelly said of the pregame ceremony and of the fans’ support. “You do get a bit choked up. It’s something that you try to fight back some tears and when you go to swallow, it feels like you’ve got something in your throat. It was something really special that they did and the anthem was incredible. ”

It didn’t stop there, though. Bruins fans continued to make noise all night long in the city’s first real step toward recovery. They were loud and they were proud, and they did all they could to let everyone else know it, even reaffirming it to themselves perhaps.

In place of the Garden’s usual “Let’s go Bruins” chants were “Let’s go Boston” chants, which could just as easily been seen as a rallying cry for the rest of the city, not just the Bruins.

“The people of Boston are proud people,” Andrew Ference said. “No different than us, they knew that it was a step for the city to get back to some sporting events.

“I think in that instance they’re not really cheering for us, but for the city and cheering for themselves as much as anything. It was pretty cool I think for everybody to getting back to having some memories about sports and some good things happening.”

Good things started to happen on Wednesday night, and they’ll continue to happen as long as the positive spirit and perseverance shown at the Garden for one night continue in the coming days, weeks and months. If they do, you can look back at the few moments prior to an otherwise meaningless hockey game as where it all started. 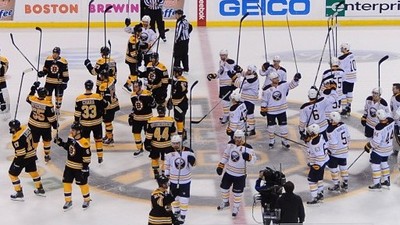