Joel Hanrahan Not Discouraged by Fenway Struggles, Dismisses Blown Save As Part of 'Life as a Reliever' - NESN.com Skip to content The Red Sox seemed destined to take a second game from the Orioles on Wednesday.

The lead was never greater than two, but the game seemed firmly in Boston’s control after Daniel Nava and Jarrod Saltalamacchia sent a pair of Jake Arrieta pitches into the seats in consecutive at-bats in the sixth inning. Two innings of hitless relief later, the Sox were three outs from giving the rain-soaked (non-capacity) crowd a victory.

Then, it all fell apart.

Closer Joel Hanrahan surrendered five runs in the ninth — four with two outs — to allow the Orioles to escape with an 8-5 win.

“I was probably trying to throw a little too hard, trying to make things happen with my arm instead of letting my mechanics [do the work],” Hanrahan said. “Sometimes you just get in a tight situation and you try harder. As athletes, we tell ourselves to slow down and relax, but sometimes it happens.”

Hanrahan was able to get two quick outs after first baseman Chris Davis homered to lead off the inning, but the wheels came off from there.

Second baseman Ryan Flaherty — who entered the ninth inning having gone 0-for-17 so far this season and and struck out in his first three trips to the plate Wednesday — laced a 2-2 pitch into left field for a single. Hanrahan then walked No. 9 hitter Nolan Reimold on four pitches and issued another to Nate McLouth — this one coming when a full-count fastball just missed the inside corner.

A wild pitch then brought pinch runner Alexi Casilla home for the tying run, and Manny Machado provided the dagger on the very next pitch, launching a three-run homer into the Monster seats to ice the game.

“Well, I started off with a home run there, that’s not how you want to start,” Hanrahan said. “I got a couple of outs right after that, then kind of went all over the place. I walked a couple of guys, threw that wild pitch and [Machado] hit that homer. When you get those two outs, you have to put guys away.”

After allowing just one hit through three scoreless innings over his first three starts, the big closer has struggled since the Red Sox returned home to Fenway. He picked up the save in Monday’s home opener, but not before allowing a pair of hits, including a home run by Adam Jones.

“I felt fine,” the 31-year-old reliever said. “I got ahead of a couple of guys, and I just didn’t put them away. I started off with a tough battle with Davis there. I threw a couple of good breaking balls that he fouled off, and he hit that one to start it off. I’ve just got to put guys away.”

Though he has not had the greatest success in his short tenure in Boston — he was booed by fans after being lifted following the Machado homer — Hanrahan acknowledges that while he certainly does not want this trend to continue, it is far too early in the season to jump to any conclusions.

“It’s not going to be hard [to forget]. I’m going to come here tomorrow and be ready to go. It’s not the first time I’ve blown a save, and it’s probably not going to be the last. It’s part of the game. It’s just how it goes sometimes.

“That’s the life of a reliever. One day you’re the goat, the next day you’re the hero. That’s just kind of how it goes. I’ll come in here tomorrow ready to go.” 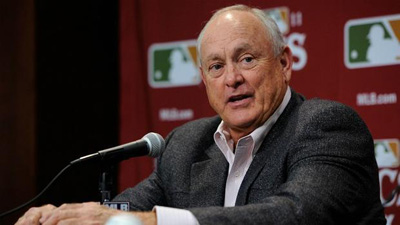