After reloading their roster over the offseason, the Patriots will have some tough cuts come September before the regular season starts.

The wide receiver, safety, offensive line and defensive line positions will have some serious battles in OTAs and training camp this year. Whoever shows up to camp best may earn themselves a roster spot.

NESN.com NFL editors Doug Kyed and Luke Hughes will do their best to make a super-early 53-man roster prediction. Check out who they think will make the cut below.

I can’t see the Patriots carrying more than two quarterbacks on the 53-man roster this season. It’s likely they keep one on the practice squad, though.

Mike Kafka could make a case for the roster, especially if the Patriots plan to trade Mallett. It’s much more likely that he, or another quarterback, sticks on the practice squad. Otherwise, I’m going chalk here.

LaGarrette Blount was the tough cut here, but Bolden is the better fit as Ridley’s backup as an every-down/goal-line back. Blount has the right size to be a short-yardage back, but his upright style keeps him from being effective in the role.

It will probably come down to Blount or Bolden for the final running back spot. I like Blount’s bulldozing running style and he presents an interesting option at fullback. Bolden is talented, but Blount’s experience and potential impact is just too tantalizing in the end.

I could see the Patriots carrying just five wide receivers, but due to the lack of experience this group has, it would be smart to carry the extra player, which in this case is Jones. If there are injuries to any of these players, but especially Amendola and Edelman, T.J. Moe has a solid shot at making the roster.

Letting Moe go was a tough call, but the depth in the slot left him as the odd man out. Hawkins and Jones are on the cut line right now, but I think Hawkins ultimately makes the team if only because he got $175,000 in guarantees —  Jones and Edelman didn’t get any.

If the Patriots elect to go with just five wide receivers, I could also see the team carrying five tight ends. In this case, Daniel Fells was the tough cut. Hoomanawanui provides more versatility with his ability to play fullback.

Ballard is an ideal backup for Gronkowski, and Hooman’s versatility and great blocking skills give him the slight edge over Fells. Where they carried five tight ends in 2012, it’s unlikely they will follow suit this year. I think they’ll allot the extra roster spot for a receiver instead of tight end this season.

The cut came down to Tyronne Green, Nick McDonald and Stankiewitch, and Stankiewitch emerged. McDonald has more versatility and Green has more experience, but frankly, I needed to plug in an undrafted rookie somewhere. Stankiewitch was highly thought of out of Penn State and his experience with Bill O’Brien should help.

I could definitely see either Stankiewitch or McDonald making the cut, but Connolly’s ability to play center in order to secure depth at guard seems more valuable. This is a make-or-break year for Cannon, too, and it wouldn’t be surprising if a poor showing got him the ax.

It came down to Bequette and Jermaine Cunningham for the last spot at defensive end and Bequette grabbed it. Cunningham had value as an interior rusher last season, but that role was filled by Tommy Kelly and Armond Armstead over the offseason. Bequette was a third-round pick last year who found limited playing time.

After a terrible camp last season, Bequette’s third-round status saved him from roster trimming. With that in mind and given the pass-rushing ability of Kelly and Armstead, it wouldn’t surprise me if they kept just four ends. In the end, Vega is just too polished and Francis may be the unfortunate casualty.

I could see a scenario where Cory Grissom or Joe Vellano make the team by September, but for now Kelly and Armstead are the guys. Kelly will have to prove he has more left in the tank than he showed with the Raiders in 2012.

There is just too much talent to pass up on the interior. Forston is another fringe roster guy, but he boasts terrific size and incredible potential. Love might need to have a very strong camp to secure his spot as well.

UPDATE: Kyle Love was taken off this roster prediction after he was cut from the Patriots.

The Patriots will typically carry a special teams-only linebacker. If he proves himself in the preseason and training camp, Beauharnais should be able to take the role while being able to contribute on defense. If Beauharnais can’t prove his special teams acumen, Niko Koutouvides or Jeff Tarpinian could make the team over the seventh-round pick.

Beauharnais undoubtedly has value on defense and special teams, but the roster will be pretty tight and he seems like a prime practice squad candidate.

The fifth cornerback spot will likely come down to Dowling and Marquice Cole. Having an extra outside cornerback will be more valuable, which is why I have Dowling making the team (as long as he stays healthy). Ryan, Dennard or one of the safeties could back up Arrington in the slot.

Cole is a really difficult cut especially because of his special teams value, but Dowling and Ryan can both fill in behind Arrington in the slot if need be. Jones is a longshot to make the roster, but I liked him at Rutgers and Belichick always has at least one undrafted rookie. He’s my early pick.

Like at linebacker, if Harmon can prove his worth on special teams, he’ll make the team over Nate Ebner. It’s also possible one of Gregory or Adrian Wilson gets cut before the season starts. If Tavon Wilson can prove he can start next to McCourty, one of the veterans could become expendable.

McCourty, Tavon and Harmon are locks, and I think Adrian Wilson is pretty well set, too. Gregory and Ebner could fight it out for the final defensive back spot, with Gregory being the more obvious choice, but keeping six corners would all but eliminate that possibility.

Ryan Allen and Mike Zupancic could put pressure on Mesko and Aiken respectively in training camp, but for now, the vets are making the roster.

It wouldn’t surprise me if they brought in a kicker to challenge Gostkowski, but I think things stay the same when all is said and done. 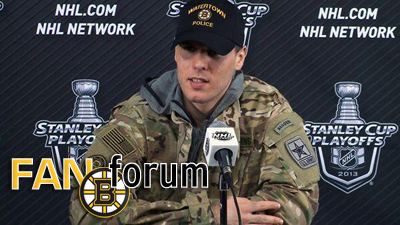 Which Bruins ‘Player of the Game’ Playoff Swag Is Your Favorite?