FOXBORO, Mass. — Aaron Dobson was just nine years old when Tom Brady made his NFL debut. The chance to play with one of his childhood idols is exciting for Dobson, but he continues to view it as more of an opportunity than a privilege.

“He knows so much about the game [and] about the receiver position,” a relaxed Dobson said after practice on Wednesday. “Him at quarterback, seeing the stuff he sees, we’re just trying to get on the same page.”

A second-round pick this spring, and entering an overhauled receiving corps, Dobson was expected to take on a major role in the Patriots’ offense this season. His size (6-foot-3) and speed (4.37 40-yard dash at his pro day) were the desirable assets that the Patriots coveted so dear on draft day and what sets him apart from the five other receivers on the Patriots’ depth chart. Yet, he’s struggled as much as any of them in adjusting to the NFL game this preseason, even noting speed as his biggest obstacle.

Speed, which was one of Dobson’s greatest assets coming out of Marshall, became the biggest hindrance in his professional development over the last few months. He has looked slow off the line at times and even struggled with press coverage, but the speed that Dobson’s talking about seems to be more mental than physical. That’s usually where coaching can take its toll.

Luckily for Dobson, he has the best coach possible throwing him passes everyday.

“He’s like a coach,” Dobson said almost excitedly of Brady. “He knows much more about the game that I don’t know. He’s been here way longer than me, so I’ve just got my eyes and ears open, listening to everything he’s telling me.”

Dobson listened attentively and made progress throughout training camp, but it didn’t always show up on gamedays — at least not the same way it did with fellow rookie Kenbrell Thompkins. While Thompkins was getting extra targets and affirming headslaps from Brady on the field, Dobson was primarily getting an earful from his quarterback.

Every Patriots receiver was on the receiving end of a Brady shout or curse this preseason because of misread or blown assignment — even Danny Amendola caught the brunt of it in practice once or twice. Dobson just seemed to be the recipient more often than others, which may be a result of his lofty draft status. The comments were usually nothing more than a simple ‘[explitive] Aaron’ or ‘come on!’ but, when they come from Brady, they carry a lot more weight.

“Oh, I mean, I’m expecting it,” Dobson said. “If I mess up, I expect that out of him to get me right and tell me what I did wrong and what I need to do right. You can’t take it like that [negatively], you just gotta listen and try to do the right thing the next time.

“There’s been some things that happened — just little things, you know. I might do the wrong line up — line up wrong, you know — going to the wrong side and he’s like ‘who’s my X’ or what position I am. So, it just kind of gets you that like ‘Oh, I’m going the wrong way.’ You just got to stay on top of everything.”

The negativity can be great motivation for a guy like Dobson, who seems to feed off the adversity, but positive reinforcement can be just as, if not even more, powerful.

“Everytime you hear something good, especially coming from him, you always feel good,” Dobson added, smiling just thinking about such a moment.

With Amendola, Thompkins and even Julian Edelman seemingly ahead of him on the depth chart, Dobson may not have many opportunities to make an impact right away for the Patriots. There’s even a chance that he’s left inactive for the season opener in Buffalo, as it’s likely either he or fellow rookie Josh Boyce will be of the team’s seven gameday inactives. That won’t hold Dobson down, though, as the rookie is constantly looking to learn and grow as a player.

Brady’s insatiable desire for knowledge appears to have had a contagious effect on his young receiver. Maybe it’s his childhood respect for Brady that prompted Dobson’s desire or maybe he’s just seizing the opportunity. Either way, he seems committed to making this relationship work. 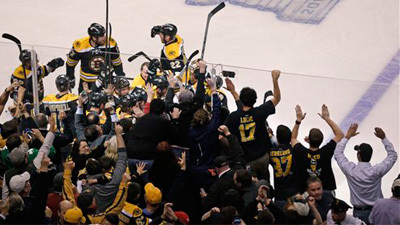 NESN to Air Bruins Behind-the-Scenes Series ‘Behind the B’ Starting Sept. 9