The Jets, Jaguars and Raiders have all been maligned for their poor performance at the quarterback position in recent years, but no NFL team has suffered through more prolonged misfortune under center than the Cleveland Browns.

Since their rebirth in 1999, the Browns have employed 18 different starting quarterbacks, with the 19th, former Patriots backup Brian Hoyer, scheduled to make his Cleveland debut this Sunday. New England, by comparison, has started just three over that period — Drew Bledsoe, Tom Brady and Matt Cassel.

Cleveland-based ad agency Brokaw Inc. posted a photo to its Instagram page Wednesday commemorating the futility of the Browns’ past and present quarterbacks, and its astonishing how little NFL success such a large group has had.

Just four former Browns signal callers have started a playoff game in their careers — Trent Dilfer, Jeff Garcia, Jake Delhomme and Kelly Holcomb — and Holcomb was the only one to do so with Cleveland.

Check out all 19 names in the photo below — and expect the Browns to add a 20th in the 2014 draft, especially after trading away Trent Richardson on Wednesday. 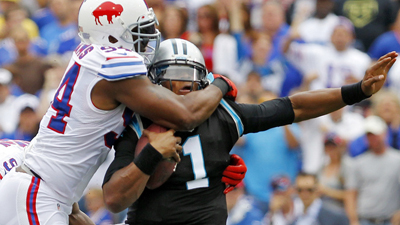