Bass could only mimic his teammate’s disinterested attitude toward the Brooklyn Nets for so long before breaking on Monday. When Rondo was asked on media day what he felt upon hearing Kevin Garnett and Paul Pierce had been traded, the point guard muttered, “Nothing.”

Bass wasn’t quite so cold when asked about the Celtics’ upcoming preseason game in Brooklyn, although he tried to act like he was.

“No, I’m not excited,” Bass said after Celtics practice on Monday, before breaking into a grin. “Nah, of course I am. [I spent] two years with them and they both helped me out a lot. They did a lot for this organization, so, yeah, I’ll be excited to see them. But at the same time, it’s going to be competitive and we’re going to compete.”

Unlike fans, who may harbor ill feelings toward Celtics president of basketball operations Danny Ainge forever and might need to resist pulling for the Nets in their visits to TD Garden this season, the players have moved on. Jeff Green called Garnett “the enemy” at the start of training camp, but that is not why Green and Garnett have not spoken since.

Bass acknowledged that there may be more rumblings before the first regular-season matchup in Brooklyn on Dec. 10, but so far nobody in the Celtics locker room has gotten emotional about seeing old No. 34 or No. 5 again. Gerald Wallace, who came over in the same trade, said he has not heard a peep about the reunion — and he would not really care, anyway.

“I don’t talk to them about that,” Wallace said. “To me, I don’t think it’s about that. Those guys are professionals, just like us. Guys change teams every day. We just want to come out and try to get better as the Boston Celtics. We cherish them and everything they did here. At the same time, they’re not here anymore. Now they’re our enemies. They’re the opposing team.”

Some of the holdovers, like Green, Courtney Lee and Avery Bradley, joke about things Pierce or Garnett used to say. It could be odd for them to hear it coming from an opponent’s mouth on Tuesday.

Although Wallace never played with Garnett or Pierce, he said he is not worried about Celtics fans having split loyalties for the preseason finale at TD Garden at the end of the month or for either of the Nets’ two visits to Boston during the regular season. No matter how much those fans appreciate Pierce and Garnett’s contributions to the franchise, Sunday’s wild sports day convinced Wallace that Celtics fans will cheer for the jersey above the individual.

“I always knew Boston fans are diehard fans,” Wallace said. “They support their teams 100 percent. They like to win. They like guys who play hard and play to win. I’ve always known that, just from my 13 years in the league.” 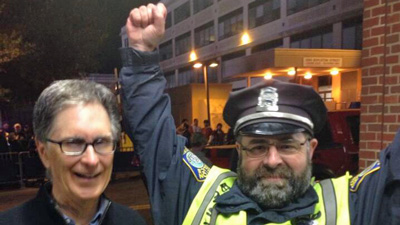 Bruins-Red Wings Live: Wings Hold On in Final Minute to Win 3-2 Over B’s