2014 Winter Olympic Games in Sochi Will Use Snow Stored From Winter of 2012 - NESN.com Skip to content The 2014 Winter Olympic Games are just around the corner, and Sochi has been busy preparing all year.

Because of uncertainty about the weather conditions in the area come February, Sochi began storing snow in 2012 just in case there isn’t enough snowfall to cover the landscape, according to Yahoo! Sports. The snow has been kept cold all through the spring and summer underneath large insulating blankets.

Organizers gathered 16 million cubic feet of snow — about the same amount as how much water flows over Niagara Falls in four minutes — in anticipation of the games, which, at $50 billion, will be the most expensive Olympics ever. The city also plans to use 200 snow blowers and water from nearby lakes to pump out some man-made flakes throughout the site of the games.

“This is kind of a safeguard for the future,” Sergei Bachin said. Bachin is the director general of the Roza Khutor resort that will host Sochi’s Alpine skiing and snowboarding events.

“We can make such an amount of snow over several nights that we could host the games even if there was not a single snowfall,” Bachin told The Associated Press.

Russian meteorologists have reportedly had trouble predicting what the weather and snowfall will be like in February because of a lack of historical data on the area. The sole weather station close by is 1,600 feet below the competition slopes and has only been operational for 10 years.

Did he call bank-shot, though? 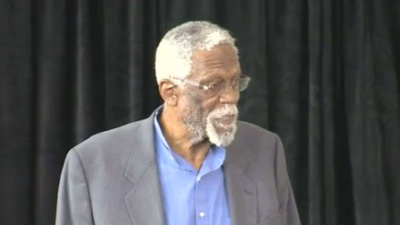