Final, Celtics 91-89: Their second win is in the books, but the Celtics weren’t exactly “victorious” against the Magic. They were more like “lucky.”

A number of defensive breakdowns in crunchtime nearly delivered a defeat to the Celtics, who played a solid all-around game for most of the second half. Brandon Bass led a balanced scoring attack with 16 points, while six other Celtics scored in double figures.

The Celtics committed a season-low 11 turnovers and battled back from a weak start on the inside to win the battle in paint scoring, 48-42. They were able to limit the damage done by Magic center Nikola Vucevic, who recorded a double-double with 14 points and 13 rebounds, and held off Arron Afflalo, who scored nine of his 23 points in the fourth quarter.

Fourth quarter, :04.6, Celtics 90-89: The Celtics might get out of here with a win, but it will be despite a lot of breakdowns down the stretch.

Needing to prevent a 3-pointer at all costs, the Celtics gave up a decent look to Arron Afflalo from the left corner. Of course, the corner is the easiest three to make, since it’s three feet closer to the hoop.

Afflalo’s shot didn’t want to go down at first, but it finally settled into the hoop. The Celtics’ only saving grace was that Afflalo stepped over the line and the shot was only a two.

Fourth quarter, :10.5, Celtics 90-87: Brandon Bass made all the big shots to help the Celtics beat the Jazz. Now he may have delivered the two free throws to ice another win in Orlando.

The Magic aggressively double-teamed everywhere off the inbound, but Kelly Olynyk was able to get the ball to Bass, who drove baseline and was fouled. He dropped two no-doubt free throws to extend Boston’s lead back to three.

Fourth quarter, :26.5, Celtics 88-87: All the Celtics needed to do was not give up a three or a quick two. They did neither, but then they made a fatal mistake.

Arron Afflalo got into the lane after the Celtics forced the Magic to waste more than half the 24-second clock, but instead of just conceding the layup, they fouled. That was the worst-case scenario, because it allowed the Magic to pull within one without having to take a low-percentage 3-pointer.

Kelly Olynyk, who has had trouble finding his shot all season, finally got a make off a set play on an out-of-bounds play to stretch the lead to four. Down the other end, Jameer Nelson dribbled straight through the defense. And refused the layup.

After Harkless’ miss, Jeff Green could have basically clinched it with a runner. But Green’s runner missed the rim and barely made the net.

Fourth quarter, 1:38, Celtics 86-84: Avery Bradley has made some nice plays in this quarter, but the one he just made might be unforgivable.

With the Celtics nursing a six-point lead, Arron Afflalo rose up for a 3-pointer — and was clobbered by Bradley trying to contest. The resulting foul sent Afflalo to the line, where he dropped the foul shot to close it to two points.

Fourth quarter, 4:09, Celtics 82-77: Avery Bradley and Victor Oladipo might be two of the best on-ball defensive guards around, and they are showing it — by defending each other.

Bradley and Oladipo both had a rip of the other, with Bradley stripping Oladipo for an and-one layup to begin the quarter. Bradley also forced Oladipo to fumble the ball after an offensive rebound, creating an opening for Crawford to dive in, get possession and call timeout.

Fourth quarter, 5:53, Celtics 78-77: Jordan Crawford wasn’t in for most of the worst late-game turnovers in Memphis or Detroit. But he was watching and learning, apparently.

Crawford, who we have noted has played very well the entire season, tried a weird reverse-spin dribbling move around a screen by Kelly Olynyk. It’s not a move you see a lot. There’s a reason why. Crawford dribbled the ball off his foot and out of bounds, giving the Magic possession.

Mistakes like that were kept to a minimum while the Celtics were pulling into and building their lead. There are more than six minutes remaining for those bad habits to return. And eventually teams regress to what they really are.

Fourth quarter, 8:25, Celtics 75-73: Brandon Bass and Courtney Lee have come up with hustle buckets to keep the Celtics slightly ahead, but the Magic are coming. Orlando is showing off the late-game experience that made them tough outs for every team they have played so far.

Arron Afflalo and Jameer Nelson will probably be on the court for the stretch run, giving the Magic two players who know how to handle close, fourth-quarter situations. This one won’t be easy for the Celtics, as usual.

With 12 minutes to go, the Celtics are in solid position to get another win — much to the chagrin to fans who want them to tank. Since committing five turnovers in the first quarter, the Celtics have given up the ball only three times. Not surprisingly, they have outscored the Magic 54-44 in that span.

Brandon Bass continues his tough work inside with 12 points and five boards, while Jared Sullinger has gotten more active in the paint as well. Nikola Vucevic has been quieted on offense — he is stuck on 12 points — but he is hitting the glass as always. He’s now up to 10 boards in the game.

Third quarter, 5:36, Celtics 61-55: Jeff Green and Brandon Bass have delivered some rim-rocking dunks, but it’s the Celtics defense that has delivered them to the lead. That and the continued solid play of Jordan Crawford.

Crawford has helped the Celtics run a crisp offense in the early going of the second half. Boston’s offense has produced an alley-oop dunk for Bass, a left-handed slam by Bass and another ridiculous throwdown by Green.

Halftime, Magic 49-46: Jordan Crawford is playing another outstanding game, the Celtics are actually rebounding and Courtney Lee is going off.

What in the world is going on?

It’s a ball game in Orlando, where the Celtics surged back from a 12-point deficit to pull within three points at the half. The Celtics got a buzzer-beating layup at the end of each quarter, with Crawford following Kelly Olynyk’s lead in the second quarter.

Crawford pushed the ball up court after a Boston defensive stand, glided into the lane and flipped in a layup with .8 seconds remaining. His free throw made it a one-possession game.

Lee leads the Celtics with 11 points, two steals and a block, while Olynyk has grabbed a team-high six rebounds. The Magic hold a 31-24 advantage on the glass, with Nik Vucevic, Arron Afflalo and Andrew Nicholson all hauling in at least five boards. But the Celtics have been much less terrible on the glass than they typically have been this season.

Second quarter, 3:22, Magic 43-34: Lee has kept rolling, but the Celtics’ ability to hold onto the ball has been a real game-changer. They have just one turnover since halftime, meaning the Magic have not been able to get out and run except off missed baskets — which, thanks to Lee, there are very few of.

Back in the place where his career began, Lee is balling. He has played both ends of the floor, tossing in a jumper, a right-handed layup and a left-handed layup to help the Celtics close the gap to six points.

Lee also has a pair of steals and the aforementioned block, plus three rebounds to go along with his eight points. After Lee’s trying season last year, he is almost unrecognizable as a productive, efficient player.

Second quarter, 8:58, Magic 31-23: After a horrendous start, Kelly Olynyk is suddenly on fire.

The rookie has hit his last three shots and Courtney Lee has made three nice defensive plays to help the Celtics make some headway. Lee has a steal and hit the deck to gobble up a loose ball, and he made a steal at one end that was rewarded on the other end when Gerald Wallace found him for the jumper in transition.

All this has happened with Vucevic, who was the best player in the first quarter, off the floor, however. So reserve your enthusiasm until Vucevic comes back in and the Celtics are able to keep this up — if they do — Celtics fans.

End of first quarter, Magic 26-15: The Celtics got off to a good start when they opened this one up with an early three-point lead. Things have gone downhill pretty much ever since.

With Nikola Vucevic doing most of the heavy lifting, the Magic owned the paint. They have outscored the Celtics there 16-4 and have nine offensive rebounds. Vucevic, a third-year center, already has 12 points, and has missed just one of the six shots he took.

Kelly Olynyk is having another rough shooting night. He shot 1-for-6 from the field in the first half, with his only bucket coming on a last-second dash to flip the ball off the backboard and in as the clock expired. He is making his presence known elsewhere, though, with a team-high five rebounds so far.

First quarter, 5:34, Magic 15-10: These two teams are in similar positions. They’re obviously rebuilding, but they have enough solid veterans remaining to play competitive basketball at times.

Led by Arron Afflalo and Jameer Nelson, the Magic answered every basket the Celtics made in the first few minutes before putting together a mini run. Nik Vucevic, who is capable of being a monster on the glass, already has an offensive board — something that Enes Kanter did in the early going Wednesday, and which earned Vitor Faverani and early — and permanent — trip to the bench against the Jazz.

6:04 p.m.: Jordan Crawford starting worked out pretty well for the Celtics the last time they tried it. So coach Brad Stevens is going back to that well again.

Crawford is back with the starting unit after the Celtics captured their first win of the season with him there on Wednesday. Gerald Wallace, the now-happy bench player, is again the odd man out.

The Magic had the worst record in the league last season and figured to be on their way to a similar fate this year, but they have exceeded all expectations. They are 3-2 after wins over the Nets and Clippers, and have played the Pacers and Timberwolves impressively well in their two losses.

One player Celtics fans cannot expect to see tonight is former Celtic Glen Davis. Big Baby is rehabbing a left foot injury and is out indefinitely. Tobias Harris, a promising forward picked up last year in a trade deadline deal for J.J. Redick, is also out with a sprained ankle.

The starting lineups are below.

8 a.m. ET: You can’t get to two straight wins without winning one first.

The Celtics (1-4) will look to do the unthinkable and win their second consecutive game when they visit the Orlando Magic (3-2) on Friday. It is unthinkable because, just a couple of days ago, even winning one game seemed outlandish for the Celtics.

Gerald Wallace, who has a newfound respect for his bench role, will most likely come off the bench again after the favorable results in Wednesday’s win over the Jazz. The Celtics were proud to get coach Brad Stevens his first NBA victory at TD Garden, but nobody summed up the teamwide feeling over getting their first win better than Jeff Green. 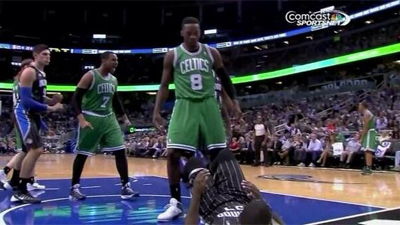