Dougie Hamilton Heading Back to Boston With Lower-Body Injury, Likely to Miss Rest of Trip - NESN.com Skip to content Bruins defensemen have been bitten badly by the injury bug, and that trend continued Sunday night in Toronto.

For the fifth time this season, the Bruins were forced to finish a game down a defenseman after Dougie Hamilton left the game following the first period. Hamilton suffered a lower-body injury late in the first and ended up heading back to the locker room. The Bruins announced shortly before the second period that Hamilton would not return to the game.

Boston coach Claude Julien revealed after the game that Hamilton had indeed suffered a lower-body injury. It’s bad enough that Hamilton will head back to Boston to be examined further and get treatment there. It’s unexpected that Hamilton will join the team on the rest of the current four-game road trip. Boston is headed out on a Western Canada swing with stops in Calgary, Edmonton and Vancouver this week.

The Bruins also lost Kevan Miller in the final minutes after he was boarded by Dion Phaneuf. According to Julien, though, Miller is expected to be OK and will likely be in the lineup Tuesday.

It’s unclear what the Bruins will do to replace Hamilton, though. They could recall another defenseman from Providence, but Julien said they’re hopeful Johnny Boychuk will be ready to go on Tuesday in Calgary. The veteran blue liner was injured early in Thursday’s game at Montreal and missed the last two games. 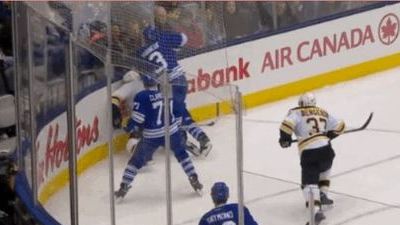