Bill Belichick might seem like a boring guy with little to no sense of humor when he’s walking the sideline or speaking to reporters, but the New England Patriots head coach actually is pretty funny when he wants to be.

Belichick cracked a few jokes for the media Tuesday at the NFL Annual Meeting in Orlando, Fla. Among them was the suggestion that the league host a bake sale and a car wash to help fund an expanded replay system that the Patriots coach would like to see, one where every play is reviewable.

Unfortunately, we don’t see this side of Belichick too often during football season because he’s so focused on just trying to improve each week (among other cliches). But when Belichick does open up and present his real sense of humor, the results usually are amazing, like when he unveiled his special “BB PB&J” recipe more than 20 years ago.

Remember kids, the key to a good PB&J is to put peanut butter on both sides of the bread so the jelly doesn’t leak through. Don’t believe me? I’ll let “head chef” Belichick explain in the video below. 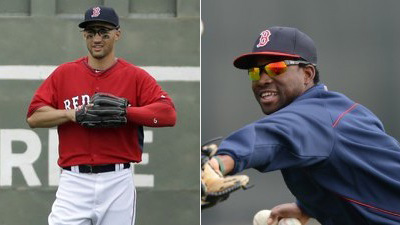 Tale Of The Tape: Grady Sizemore Or Jackie Bradley Jr. For Red Sox?