Koji Uehara Expected Back For Red Sox During Series In Chicago - NESN.com Skip to content A sore shoulder for Koji Uehara likely will not land the Boston Red Sox closer on the disabled list.

Uehara, who was unavailable for the final three games of the Red Sox’s series against the New York Yankees, threw off flat ground Sunday, and manager John Farrell told reporters that he expects to have the right-hander back sometime during the team’s upcoming three-game set against the White Sox in Chicago.

?He was really able to generate good arm speed. He?s moving past some of the concerns, mentally, that he had,? Farrell said before Sunday’s 3-2 loss to the Yankees, via WEEI.com. ?During the time he was throwing, he felt better than he actually expected. He?s still going to return to Boston to go through a full workup tomorrow. At this point, we?re hopeful and expecting him to return to us in Chicago. We?d still like to get him off a mound in a bullpen session or get him back in a game, but today overall was very good news regarding Koji.?

Uehara has yet to allow a run in five one-inning appearances this season, scattering three hits and striking out seven.

The Red Sox are off Monday before beginning their series with the White Sox at U.S. Cellular Field on Tuesday. 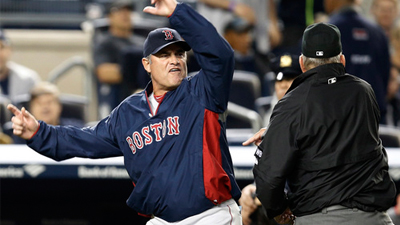 John Farrell: ‘Hard To Have Any Faith’ In Replay After Controversial Calls