NEW YORK — The New England Patriots took a rare risk in Round 1 of the NFL draft.

The Patriots selected Florida defensive tackle Dominique Easley, who suffered two torn ACLs during his four-year career at Florida, with the 29th overall pick. Easley’s latest injury came in September, when he tore his right ACL during practice.

Easley has huge upside, however — perhaps the highest in the entire draft. The 6-foot-2, 288-pound defender is a disruptor, both against the pass and while defending the run.

Easley was medically cleared at the NFL Scouting Combine recheck, and he said he was 80 percent healthy during his individual pro day in April. If the Patriots didn’t select Easley, the San Francisco 49ers and Seattle Seahawks were interested in drafting him.

The Patriots lacked depth and explosion along their defensive line in 2013 after Wilfork and Kelly were injured. Easley should be fully healthy by the time the Patriots open the season in September. His injury was unfortunate, but the timing could have been much worse, since he had time to heal during the college season.

Easley might not begin the season as a starter if Wilfork and Kelly come back healthy, but he can serve as a rotational player who specializes on third down against the pass, He’s slightly undersized, but he’s great at jumping the snap and finding room between blockers.

Easley is smaller than those three players, but he might wind up being the best pass rusher of the bunch. He should combine with 2012 first-round pick Chandler Jones to form a disruptive pair. 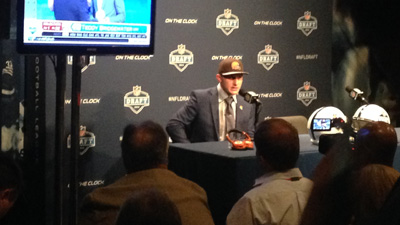