Even if you are not a huge fan of Marcus Thornton or Tyler Zeller, Danny Ainge and the Boston Celtics came out as winners for their supporting role in Wednesday’s three-team trade.

By taking on Thornton’s $8.6 million expiring salary, the Celtics acquired another first-round draft pick to add to their stable, plus a 24-year-old 7-footer who could still have room to grow. And all it cost the Celtics was a second-round pick.

How did this come about?

The Cleveland Cavaliers and Brooklyn Nets each had a problem. The Nets needed a backup combo guard after Thornton and Jason Terry fizzled last season, and were willing to overpay. The Cavs needed to shed backup combo guard Jarrett Jack’s guaranteed $12.6 million over the next two years to open up salary cap space in an effort to sign LeBron James in free agency. But they needed a third party.

The cavalry arrived in the form of Ainge and the Celtics’ $10.3 million traded player exception. Conveniently, Thornton’s $8.6 million from the Nets and Zeller’s $1.7 million from the Cavs fit neatly into the amount of combined salary the Celtics could take on without sending out any players of their own to satisfy the NBA’s salary-matching requirements. For their trouble, the Celtics received a protected 2016 first-rounder from Cleveland.

All the Celtics had to do, other than sacrifice the trade exception that was due to expire Saturday, was part with a second-round pick for housekeeping purposes.

The Celtics are the only team in this transaction, assuming it goes through, that assumes almost no risk. If the Cavs can’t lure James, they will have given up a draft pick, a young big man who averaged 13.7 points and 9.7 rebounds per 36 minutes and a useful reserve guard in vain. Jack doesn’t exactly vault Brooklyn into an Eastern Conference contender, although he does help draw down Mikhail Prokhorov’s massive luxury tax bill slightly, simply by being less expensive than Thornton.

The Celtics? They add what could be their ninth first-round pick in the next four years and no major long-term money to their payroll. Thornton’s contract expires next summer, along with Rajon Rondo’s ($12.9 million), Brandon Bass’ ($6.9 million), Joel Anthony’s ($3.8 million) and possibly even Jeff Green’s ($9.2 million, with a $9.2 million player option for 2015-16). That’s as much as $41.4 million that could come off the books in one fell swoop.

Already stacked with assets for the rebuilding effort, the Celtics strengthened their hand for trades or for simply building slowly through the draft. They now have another draft pick to dangle at the Minnesota Timberwolves for Kevin Love, or to any team, for that matter. Even if the 2016 pick is top-10 protected, if the Cavs land James, there’s no way the Cavs will be picking in the lottery in two years.

Once again, Ainge scored a victory in a deal involving the Nets. In fact, due to the use of the trade exception, this could be viewed as the completion of last summer’s blockbuster trade that sent Paul Pierce and Kevin Garnett to Brooklyn. Essentially, the Celtics landed four first-round draft picks — 2014, 2016 and 2018, plus the right to swap picks in 2017, from the Nets; and now 2016 from the Cavs — as a result of last year’s deal.

That’s quite the haul for two aging future Hall of Famers who helped the Nets win all of five playoff games.

This deal isn’t quite the “fireworks” most fans had in mind when Celtics managing partner Wyc Grousbeck used that word to describe the team’s summer plans. A lot of casual fans probably wouldn’t know Marcus Thornton from Marcus Aurelius. But for either a short- or long-term rebuild, Ainge has buttressed the Celtics’ position at virtually no cost to themselves.

Jon Lester On Red Sox Contract Talks: ‘No Reason Not To Have Hope’ 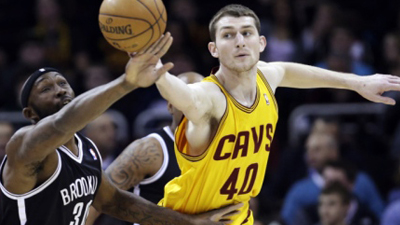 Celtics-Cavaliers-Nets Trade: Who Gets What In Reported Deal?