Brock Holt: I'm Ready For Whatever Role Red Sox Give Me In 2015 Season - NESN.com Skip to content

Brock Holt is up for anything.

Holt, whose role with the Red Sox frequently changed throughout the 2014 season, is unsure how he?ll be used in 2015, especially in the wake of Boston?s new additions. The super utility man doesn?t find the uncertainty discouraging, though. Instead, he?s embracing his undefined job.

“I’m just kind of happy to help out however I can,” Holt told ESPN.com in a phone interview Thursday. “A guy in my spot, that?s the kind of attitude you?ve got to have. Just go in and be ready for whatever they might want you to do. That?s what I plan on doing.?

Holt bounced all over the place in 2014, playing every position except pitcher and catcher. It?s possible he?ll do the same in 2015, as his versatility proved extremely helpful despite the Red Sox?s disappointing season.

?I don?t really know what to expect,? Holt told ESPN.com. ?I?ve talked to (general manager) Ben (Cherington), I?ve talked to (manager) John (Farrell). They told me that it?ll probably be kind of similar to what I did last year. Move around, give guys days off whenever they need them.

?I?m just going to go into spring training (and) try to get ready to be in whatever role that they have me in. I?m not sure exactly what it will be, but I?m sure I?ll be moving around kind of like I did last year.?

Holt was a positive in an otherwise tumultuous campaign for Boston. The 26-year-old hit .281 with four homers, 29 RBIs, 12 stolen bases and a .331 on-base percentage in 106 games while serving as a catalyst, particularly upon stabilizing the Red Sox?s leadoff spot.

Holt might be entering 2015 without a starting job, but there still could be plenty of opportunities. Dustin Pedroia, Mike Napoli and Shane Victorino all are coming off injuries, and Holt?s ability to play both the infield and the outfield makes him a valuable asset.

?Continue to enjoy the game and play hard and whatever happens is going to happen,? Holt said of his role. ?Go out and do what you?re capable of doing and don?t try to do too much.?

Steven Gerrard ‘Humbled’ By Support, Vows To Fight On For LFC (Photo) 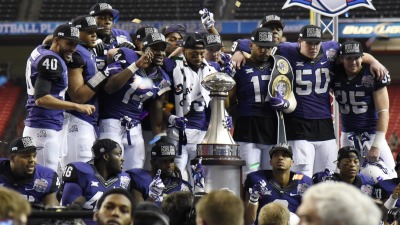 College Football Playoffs: Did TCU Deserve Spot In Semifinal Round?