New England Patriots fans collectively panicked upon finding out their team would face the Baltimore Ravens in the divisional round of the playoffs.

They should be much more relaxed after the Indianapolis Colts advanced to the AFC Championship Game.

Regardless of the reason, Patriots supporters might have reason to be confident. The Patriots have a history of success against Luck and the Colts, and if New England was able to win in Indianapolis just two months ago, then one would think repeating in Foxboro shouldn’t be too difficult.

Let’s look at this week’s matchups:

Brady had an average day at the office the last time the Patriots played the Colts, throwing for 257 yards with two touchdowns and two interceptions. The Colts, who allowed an 88.7 passer rating this season, could give him a hard time again this week, but Brady should prevail.

Mike Adams had both of the Colts’ interceptions during that Week 11 matchup, but Brady surely will keep track of where the Colts’ starting free safety is lining up this week.

Tight end Rob Gronkowski had four catches on five targets for 71 yards with a touchdown. He also famously threw Colts strong safety Sergio Brown “out of the club.”

Receiver Danny Amendola is on a roll now, and the Patriots should have an easier time passing at home.

Running back Jonas Gray ran for 201 yards on 37 carries the last time he faced the Colts. Then he subsequently was benched for the rest of the season after sleeping in one morning, receiving just 20 carries in six games. He was inactive in the Patriots’ first playoff game against the Baltimore Ravens.

The Patriots hadn’t yet signed LeGarrette Blount in Week 11, so it’s unclear which back will get the majority of carries this week. It would be smart to give Gray the first crack to see if he can recapture the magic he had earlier in the season.

Regardless of who’s lined up behind Brady, the Patriots, who rushed for 246 yards and 5.6 yards per carry, shouldn’t have trouble moving the ball on the ground. At least they shouldn’t have as much trouble as they did in the divisional round of the playoffs, when the ran for just 14 yards on 13 carries while still beating the Ravens.

WHEN THE COLTS PASS
Patriots: 240 yards allowed per game (17th in the NFL)
Colts: 306 yards per game (first in the NFL)
Advantage: DRAW

Andrew Luck doesn’t have a great history of success against the Patriots in three games (all losses), completing 53.8 percent of his passes for 968 yards with six touchdowns and eight interceptions. Luck played pretty well in Week 11, however, throwing for 303 yards with two touchdowns and an interception.

The Patriots ranked 17th in yards per game, but their 84 passer rating against was just 10th. They allowed 24 passing touchdowns with 16 interceptions, and led by cornerback Darrelle Revis, have another big test this week.

Luck led the NFL in passes thrown over 20 yards this season, completing 39 of 88 attempts for 1,387 yards with 12 touchdowns and three interceptions. The Patriots praised Ravens QB Joe Flacco for his deep-passing ability last week, but Luck is even better. The Patriots allowed Flacco to complete just two of six attempts Saturday for 57 yards with two interceptions.

The Patriots’ defensive backs should match up better with the Colts this time around. It’s unlikely that cornerback Brandon Browner will cover tight end Coby Fleener again. Fleener had seven catches for 144 yards in Week 11. Linebacker Jamie Collins could be a better matchup for Fleener.

Revis covered wide receiver Reggie Wayne, but he could match up with T.Y. Hilton this week with either Browner or Kyle Arrington on Wayne.

If Patriots fans should have a fear in this matchup, it’s that Luck finally completely pulls it together against the Patriots and avoids mistakes that have plagued him in the past. The Patriots are pretty good at forcing those errors, however.

The Colts ran for just 19 yards on 16 carries the last time these teams played, and Luck had 15 of those yards. Running back Ahmad Bradshaw suffered a season-ending injury in that game, however, and Richardson has been inactive in the Colts’ first two playoff games.

Daniel Herron and Zurlon Tipton have since taken over for Bradshaw and Richardson, and they’ve certainly been more productive, but Herron’s fumbling tendencies could bite the Colts against the Patriots. He fumbled six times in just 80 carries between the regular season and playoffs.

The Patriots had a tough time defending the run against the Ravens, allowing 136 yards on 28 yards, but Justin Forsett is a much different style runner than Herron — appropriately nicknamed “Boom” at 5-foot-10, 212 pounds — or the 6-foot, 231-pound Tipton, both of whom prefer to run between the tackles, where defensive tackles Vince Wilfork, Sealver Siliga and Alan Branch will be waiting. 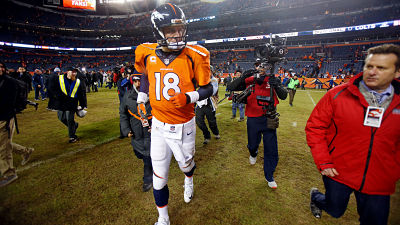 Peyton Manning Not Ruling Out Retirement After Another Playoff Loss 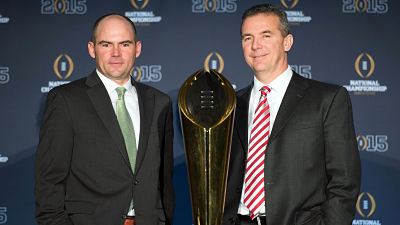 Oregon-Ohio State Tale Of The Tape: Buckeyes Have Edge In Championship