Pedro Martinez has a book coming out, and if the excerpt is any indication, it’s going to be a treat.

The 2015 Baseball Hall of Fame inductee is set to release his book, “PEDRO,” on May 5. The autobiography, written with the Boston Herald’s Michael Silverman, sure sounds like a must-read for all baseball fans but especially Boston Red Sox fans.

An excerpt for the book was released Thursday on SI.com, and it’s fantastic. In the excerpt, Martinez touches on his rivalry with the New York Yankees — including calling his toss of Don Zimmer in the 2003 ALCS the biggest regret of his career — and also shares some stories about former Red Sox teammate Manny Ramirez.

“Manny was just a kid, one I wanted to take care of,” Martinez explains, via the SI.com excerpt. “On the road he sometimes was afraid to go to sleep by himself. He?d come up to my room, where Ortiz and some teammates and I would be hanging out. After a while we?d look over and there would be Manny, under my covers, fully dressed, snoring. I always had a suite with an extra bed, so I didn?t mind if he had a sleepover. That was just Manny being Manny.”

Also part of the excerpt was a story from a 2003 game against the Yankees. In that game, Martinez infamously drilled New York’s Derek Jeter and Alfonso Soriano on the hand area, causing both to leave the game with injuries. Martinez’s ability to throw inside and the confidence to do so is one of the biggest traits he had going for him during his playing days. He wasn’t afraid to throw in, and he certainly wasn’t afraid to hit someone, as he explained to Derek Lowe.

“Derek Jeter was up next, and I sailed one in on his hands and got him good,” Martinez recalled, per the SI.com excerpt. “Both he and Soriano had to leave the game early to have X?rays taken. I told some teammates, ‘At least I gave them a discount on an ambulance — they both got to go in the same one.’ That comment surprised  Derek Lowe. He told me he figured that when I hit batters, it was an accident 90 percent of the time. He was 100 percent wrong. When I hit a batter, it was 90 percent intentional.” 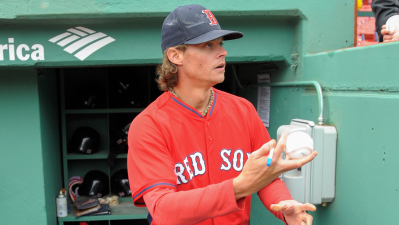