BOSTON — Let the Celtics be the first to tell you: There’s no place like home.

After dropping Games 1 and 2 on the road amid stretches of abysmal basketball, Boston revived its NBA playoff hopes in Game 3, beating the Atlanta Hawks 111-103 in front of an electric TD Garden crowd to push the best-of-seven first round series to 2-1.

The Celtics got off to a white-hot start and held off a strong Hawks comeback to snap a seven-game postseason losing streak and give head coach Brad Stevens his first playoff win.

Isaiah Thomas was critical to the Celtics’ success, leading all scorers with a monster 42-point performance. Evan Turner added 17 points, while Jonas Jerebko filled the stat sheet with 11 points, 12 rebounds and four assists in his first start as a Celtic.

Jeff Teague paced the Hawks with 23 points, while Kent Bazemore tallied 20 points and Dennis Schröder added 20 off the bench.

HOME COOKING
The Celtics’ first quarter was a mirror image of their brutal opening quarter in Game 2.

Much to the delight of an amped-up Garden crowd, the C’s came out of the gate firing, drilling 5 of 10 3-pointers and shooting 57 percent from the field to jump out to a huge 17-point lead.

It's a 3-point party early in Game 3, with the C's hitting from all over. Catch the action live on @CSNNE! pic.twitter.com/LoP5wLOWrA

Thomas poured in 16 points in the frame, while new starter Jonas Jerebko made the most of his opportunity with a tip-slam and a big 3-pointer.

Boston’s 37 first-quarter points were more than the team had by halftime in both Games 1 and 2.

STAYING AFLOAT
The Hawks responded with a solid second quarter, but the Celtics did just enough to take a 12-point lead into halftime.

Al Horford and Teague helped engineer a 16-5 run that cut Boston’s lead to just nine, as the C’s cooled off a bit after their hot start. But the Celtics went into the half on a high note when Thomas found Amir Johnson for a rousing alley-oop.

The Hawks were plagued by poor 3-point shooting in the first half, going just 2-of-17 from distance.

SINKING SHIP
The Celtics saw what once was a 19-point lead evaporate by the end of the third quarter.

Thomas did his part to keep the Celtics in it, scoring 10 points in a span of about two minutes to counteract a 12-0 Hawks run. But Atlanta would not be denied, as Schröder led the Hawks on an 11-2 run late in the quarter that gave them a one-point lead.

Jerebko cleaned up an offensive rebound just before the buzzer to put the C’s back in front by one entering the fourth.

LAST MAN STANDING
Both teams caught fire in a high-scoring fourth quarter that came down to the wire.

The Hawks and Celtics combined to score 17 points in a span of under two minutes, with both clubs lighting it up from deep. But Thomas got the last laugh, drilling a 3-pointer from Stephen Curry range with 1:53 to play that put the C’s up seven and proved to be the dagger.

TRADING BLOWS
The intensity picked up considerably in a pivotal Game 3.

Both teams were chippy from the get-go, with Thomas and Schröder getting into a first-quarter scrap that resulted in matching technical fouls.

The extra-curricular activities continued into the second half, as Celtics big man Jared Sullinger and Paul Millsap were assessed flagrant fouls on back-to-back possessions in the third quarter. Schröder also was hit with another flagrant on Thomas in the fourth quarter.

PLAY OF THE NIGHT
The best bucket of the night also was the first, as Jerebko opened the scoring with a monster tip-slam:

Wait for it… Wait for itttt… BAM! pic.twitter.com/CpgUFYvf95

UP NEXT
The Celtics are back in Boston for Game 4, which will tip off Sunday at 6 p.m. ET. The series will shift back to Atlanta on Tuesday for Game 5 and return to Boston on Thursday for Game 6, if necessary. 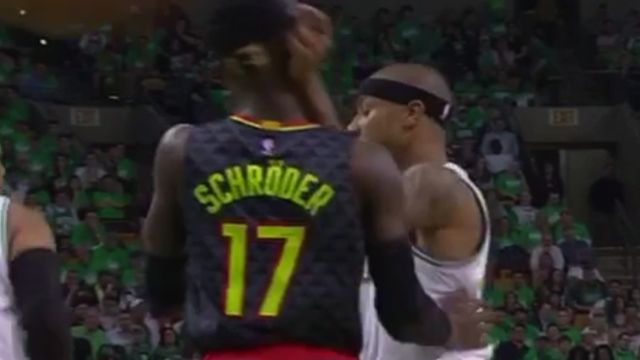 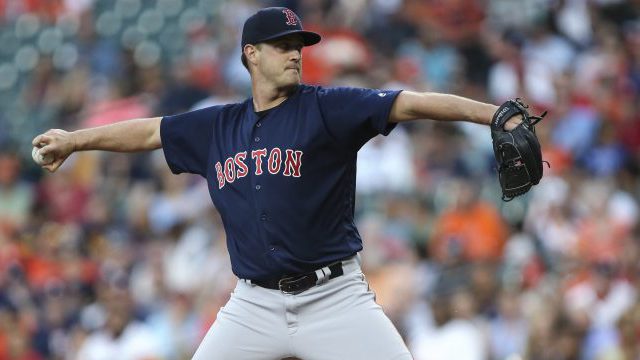