BOSTON — The Boston Celtics and Milwaukee Bucks aren’t exactly bitter enemies, but it appears a rivalry is starting to brew between the teams’ point guards.

Following the Celtics’ Game 2 win over the Bucks on Tuesday, Eric Bledsoe was asked about his matchup against Terry Rozier in the first-round series. Not only did Bledsoe fail to acknowledge the competition, he acted as though he couldn’t even pick the Celtics guard out of a lineup.

Eric Bledsoe on if he takes the matchup with Terry Rozier personally: ?Who?? Bledsoe replied. ?Terry Rozier,? a reporter said again. ?I don?t know who the f*** that is,? Bledsoe responded.

Aside from being a three-year NBA veteran, Rozier certainly has done enough in the last two games against Milwuakee alone to get the attention of Bledsoe. The 24-year-old has dropped 23 points in each of Boston’s wins and has yet to commit a turnover in the series.

Bledsoe’s failed jab seemingly is a product of one of two things: He’s either bitter about Rozier and the Celtics’ strong play, or he has sour grapes about his cross-court rival flubbing his name after Game 1.

Cubs’ Anthony Rizzo: ‘We Play Too Much Baseball,’ Advocates For Shorter Season 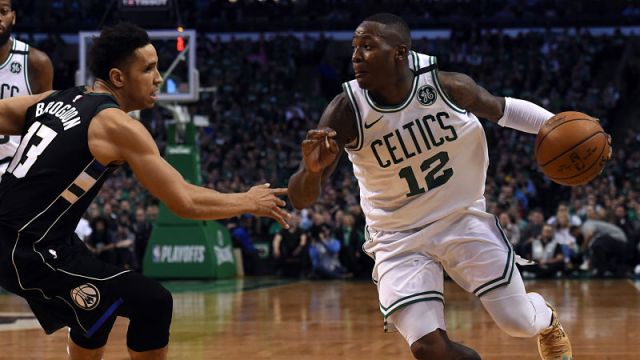