The Boston Red Sox and New York Yankees were involved in a benches-clearing brawl earlier this season, and the bad blood was renewed Friday night at Fenway Park.

The home plate umpire issued warnings to both teams, which caused Cora to race out of the dugout in protest before being given the quick ticket to the showers.

Following Boston’s 4-1 win, Cora discussed his ejection, saying he thought Severino should have been ejected if the umpire felt the pitch was intentional.

When asked if the bad blood was over for now, Cora fired a parting shot at Severino before exiting his press conference.

“I don’t know. Four runs in less than six innings. Is that a quality start?” Cora said, as seen on NESN’s postgame coverage.

Salt in the wound.

The Red Sox scored three runs off Severino in the first inning, two of which came on a home run from Steve Pearce, and that was all Porcello needed, as the right-hander tossed a complete-game gem to push Boston’s American League East lead to 7 1/2 games. 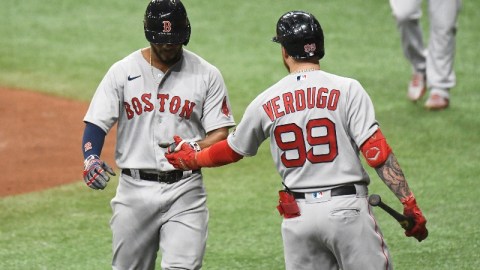