Leading up to Tuesday night’s bout in the Bay Area, a win seemed tough to come by for the Boston Celtics.

Losers in five of their last six games and playing one of the NBA’s best teams, the C’s stunned pretty much everyone. They dismantled the Golden State Warriors 128-95 at Oracle Arena in the first contest of their four-game West Coast road trip.

Stephen Curry had 23 points and was one of three Warriors in double figures.

SHARP START
Getting off to a fast start pretty much was a requirement for the Celtics, and they did just that, ultimately outscoring the Warriors 32-24 in the opening 12 minutes.

The Celtics came out of the gate firing, dropping 11 unanswered points over the first 3:18 of the game, forcing Warriors head coach Steve Kerr into a timeout. The stoppage worked, as the Warriors proceeded to string together a 12-2 run to claw back within one, but the Celtics then poured in eight straight to swell their lead back to nine. Their advantage hung around there the rest of the first.

Hayward, Irving and Curry all had seven first-quarter points. The Celtics hit 14 of their 23 attempts (60.9 percent) from the field in the stanza.

OFFENSIVE ONSLAUGHT CONTINUES
Put simply, the Warriors had no answer for the Celtics’ offense. To conclude one of its best halves of the season, Boston scored 41 second-quarter points to Golden State’s 24 and carried a massive 73-48 lead to the break.

The Celtics carried their strong offense from the first quarter into the second, and after going up by 11 just 35 seconds into the period, they never let their lead get back into single digits the rest of the game. Smart hit a jumper just before the buzzer to extend the C’s lead to 25, their biggest advantage of the contest.

Brown provided one of the half’s top highlights with this authoritative finish.

Smart also turned some heads with this deft pass that he slipped to Hayward.

Marcus Smart with the DIME pic.twitter.com/klNUcH4hKj

When the first 24 minutes came to a close, Hayward and Curry led all players with 19 points after they each contributed 12 points in the second.

CREATING SOME ROOM
A late surge allowed the Celtics to outscore the Warriors 32-28 in the third and take a 105-76 lead into the final stanza.

The Warriors quickly cut into the deficit with an 8-2 run to kick off the first 3:06 of the second half, but the Celtics responded by scoring nine of the next 12 points to force the hosts into a timeout at the 7:15 mark.

At times, Boston’s offense in the third slowed down considerably from how it played in the first half, allowing the Warriors to chip away at times. The Celtics never allowed Golden State to make things too interesting, though, keeping their advantage at 17 or greater the whole period.

The Celtics finished the final 1:52 of the third on a 12-0 run to extend their lead to 29 and all but certainly put the game out of reach.

Emblematic of the Warriors’ night as a whole was Kevin Durant just getting worked over by Tatum as he tried to finish at the rim.

"I'll be taking that." pic.twitter.com/p2gnMWWU0a

C’S CLOSE DOOR
The result hardly was in doubt after the third quarter, making the fourth more of a formality than anything. Boston finished the night by outscoring the Warriors 23-19 in the final frame to close the door.

Some frustration for DeMarcus Cousins boiled over in the fourth. The Celtics had been targeting Golden State’s big man, and Cousins responded to bodying Aron Baynes to the floor by standing over the Celtics center. Tatum shoved Cousins in response, Cousins shoved back, then Terry Rozier stepped in and pushed Cousins. Both Rozier and Cousins were served technical fouls for the scuffle.

PLAY OF THE GAME
This is pretty much how the entire night went.

UP NEXT
The Celtics will play the second leg of their back-to-back Wednesday against the Sacramento Kings. Tip from Golden 1 Center is set for 10 p.m. ET. 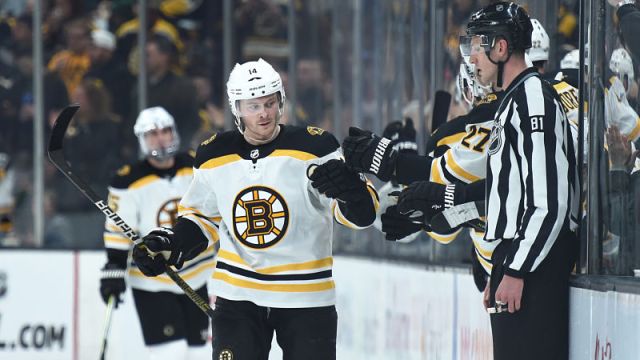 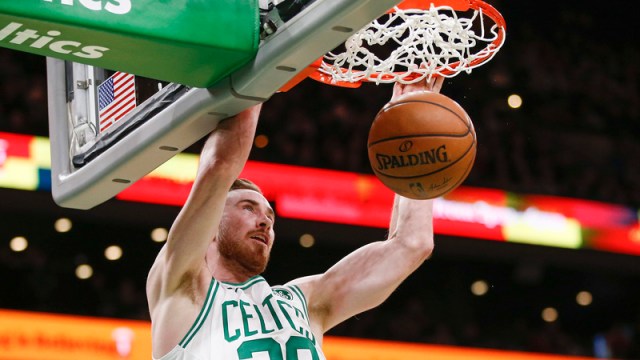