Dougie Hamilton's Early NHL Success Comes as No Surprise to Those Who Watched Him Grow - NESN.com Skip to content Dougie Hamilton‘s skill and talent level have been easy to see through the first quarter of his first NHL season. Occasional glimpses of that are to be expected of a first-round draft pick who many pegged as a fixture on the Bruins’ blue line for years to come.

However, it is a bit surprising that the 19-year-old has been so effective already. He’s been trusted to play important minutes for one of the league’s best teams, and he has rewarded his coach’s and his organization’s faith in him thus far.

The level of impact that he’s had in his first go-round in the NHL doesn’t come as much of a surprise to those who have seen him evolve into what he is now. Those same people also know that his development is far from over.

Much of Hamilton’s success (perhaps as well as his natural athletic ability) could likely be attributed to his upbringing. He’s the second son of two Canadian Olympic athletes. His father, Doug, was a rower who won a bronze medal in rowing at the 1984 Olympics and also competed in the 1988 Olympic games. Dougie’s mother, Lynn, was also an Olympian in ’84, as a member of the Canadian women’s basketball team.

There was an obvious dedication to Hamilton’s athletic growth, as the Hamilton family moved to St. Catherines, Ont., when Hamilton and his brother Freddie (a prospect in the San Jose system) were growing up. That allowed the family to stick together, as the boys played junior hockey for the Niagara IceDogs in the Ontario Hockey League.

Hamilton was drafted to the club in the second round of the 2008 OHL Priority selection, where he was teamed up with his older brother.

It was clear from the get-go that Hamilton was going to be a force to be reckoned with in the OHL.

“Physically, he was big and strong even back then as a young kid,” Mike McCourt, who coached Hamilton in his first year with Niagara, said. “We knew he was a special player.”

Hamilton worked tirelessly to make adjustments in that first season with the IceDogs. He worked closely with former NHL defenseman Randy Ladouceur and absorbed as much as he could when given that opportunity.

“He was always a kid who searched out video and wanted his game critiqued and wanted feedback,” McCourt said. “He’s a very coachable kid and he was very receptive to any feedback that he got.”

He made the most of that feedback and quickly developed into one of the OHL’s best defensemen. Hamilton’s D-partner that first year, Shayne Rover, realized quickly that Hamilton was a special talent.

“He was already 6-foot-4, 6-foot-5, as a 16-year-old, and he was already developing that offensive part of the game,” Rover said. “The defensive part was already there and you knew right away he was going to be something special.” “He was kind of a perfectionist in terms of how he carries himself,” McCourt said. “He’s a kid who maximizes practice time. Certainly in the game that translates. He’s a kid who wants to do everything and do it to the best of his ability.”

Unsurprisingly, Hamilton continued to develop. In his second season with the IceDogs, he scored 12 goals and added 46 assists while finishing a plus-35 for Niagara. He did so while playing for a new head coach, as Marty Williamson took over behind the bench. Williamson knew right away that he was inheriting an extremely talented player, who was probably going to only get better.

“We just saw a lot of that about how he cared about the details and cared about the little things and he really took good care of himself,” Williamson said, adding that Hamilton’s athletic pedigree surely played a part in his dedication, preparation and attention to detail.

“[Hamilton was a perfectionist] sometimes to a fault,” the coach added. “I wanted him to have a smile on his face and not worry about things. But he pushes himself very hard and demands a lot from himself. It’s what’s going to make him a wonderful pro.”

The continued success and development opened the door to the NHL for Hamilton. Draft-eligible in 2011, the Bruins wasted no time making him a first-round draft pick, taking the big blue liner with the ninth overall pick.

He was still at least a year from playing with the big boys, and after going through development camp in Boston, Hamilton returned to the OHL.

He only continued to get better. The accolades continued to pour in. Hamilton was named the 2011-12 CHL defenseman of the year in his third season at Niagara. He racked up 72 points in only 50 games, and he was the best player on the ice at many times.

“The last couple of years, seeing him dominate the league the way he did was pretty unreal,” Rover recalled.

It was becoming clear that Hamilton had NHL success in the future — the very near future. That put an added pressure and emphasis on working on the little things in his game. Hamilton could dominate junior no problem, but what could he do to prepare for the jump to the NHL level?

“When they play here, they become dominant. That’s the biggest thing we tried to impress on Dougie — that he needed to be defensively responsible, work on his battles and that’s hard for them because they can do so much at this level. They can just grab the puck and kind of do what they want.”

With the NHL lockout looking to squeeze the life out of the 2012-13 season, Hamilton went back to Niagara to begin the season. He thoroughly dominated again, working on the little things to make himself a better player. He put up more gaudy numbers, with 8-33-41 totals in just 32 games, and he was a plus-25. The lockout was finally lifted in January, and Hamilton was on his way to Boston to compete for a job.

He did just that, and like with everything else in life, he found success. Hamilton made the team out of an abbreviated training camp, and he found himself skating alongside the likes of Zdeno Chara and Dennis Seidenberg, becoming the latest addition to one of the NHL’s deepest defensive corps.

It didn’t take long for Hamilton to make a noticeable impact, either. He registered four points in his first five NHL games, and he won over Bruins fans in the process. Toward the end of his first career two-point game against the Islanders on Jan. 25, fans were chanting “Dougie, Dougie,” with “Teach Me How to Dougie” blaring over the TD Garden speakers.

That early success wasn’t met with much surprise back in Ontario, though.

“I think he’s quietly confident and he believes in himself and believes in his ability,” McCourt said. “He prepares himself to succeed and he expects to succeed. To see him realizing this much success early on, it’s not much of a surprise to me.”

“He skates better than I’ve every seen anyone [skate] that big,” Rover added. “He’s got the physical component of the game when he wants to and his hands and his offensive decision-making are top-notch. To see him step in there with the big boys, he doesn’t look out of place at all.”

Despite his early success and ascension into a fan favorite in Boston, Hamilton remains quiet off of the ice. He sits in his stall during postgame media sessions, quietly and politely answering questions lobbed his way. He seems calm in doing so — the added attention hasn’t seemed to get to him yet — but he’s also reserved, maybe even shy. This type of behavior was met with little surprise from those closest to him over the last few years.

“He probably hasn’t changed a whole lot,” McCourt said. “He was pretty business-like in how he came to the rink and he was very mature beyond his years, even for a 17-year-old. I don’t think that’s changed.”

“He’s a smart guy, and he knew when it was appropriate for him to chime in and when he should stay quiet as a young guy,” Rover recalled of his former D-partner. “As far as outside the rink and outside of the dressing room, he’s one of the better guys I’ve known.”

Of course, you would expect a 19-year-old kid, away from home for the first time while playing in the NHL, to be a little bit reserved. That might start to change as he gets some more NHL service under his belt.

The beginning of Hamilton’s NHL career hasn’t been without a speed bump here and there, though. He experienced a six-game pointless streak and was a minus-4 over that time before breaking through and scoring his first career goal on Feb. 15. And he’s coming off a game against Winnipeg on Sunday night where he played only 14:00, his lowest amount of ice time since opening night.

Peaks and valleys are to be expected for an NHL rookie. Don’t expect, however, those valleys to last too long for a player like Hamilton, who is by all accounts incredibly coachable and always looking to improve.

“I don’t think he’s going to be a kid whose head is going to swell,” McCourt said. “I think he’s grounded and realizes how much work it takes to not only make it in the NHL, but to have a career with some longevity.”

Some have a specific NHL comparison in mind when they project Hamilton’s career path. Both McCourt and Williamson were quick to compare Hamilton to another former IceDogs D-man, current Blues defenseman Alex Pietrangelo. They’re both big, strong defensemen who can do a little bit of everything.

“I just think when you’ve got a guy like that who’s quarterbacking your power play and then logging ice time, you’ve got a pretty unique and special player,” Williamson said. “Dougie’s got that ability to be a shut-down guy, but also he can generate offense. Those are pretty unique-type players in the NHL.”

The talent, the natural ability and the God-given size and strength are there, no doubt. But what might separate Hamilton from others will be the vaunted intangibles.

That should make Bruins fans pretty happy to have Hamilton in Boston.

“I think he’s going to continue to have the same attitude day in and day out and continue to look to get better,” McCourt said. “He’s going to be a great piece for that team for a long time to come.” 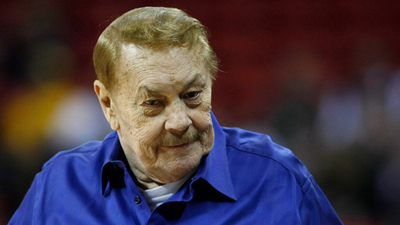 Jerry Buss, Longtime Owner of Lakers, Dies at 80 After Battle With Cancer