The Boston Red Sox held an emotional pregame ceremony Sunday night at Fenway Park to honor the victims of last year’s tragic Boston Marathon bombing. The tribute came on the eve of the 118th Boston Marathon.

The ceremony began with a video tribute that looked back on April 15, 2013, and showed how far some of the victims have come, as well as the outpouring of support the city of Boston received. Then as the University of Massachusetts-Amherst marching band and the Boston Pipers Society performed, law enforcement officials, medical personnel, runners and race volunteers made their way onto the field.

The victims, all wearing “Boston 617″ jerseys, were led by Jeff Bauman and Carlos Arrendondo, while Dick and Rick Hoyt led the runners onto the field.

James Gallager, the president of One Fund Boston, which has raised more than $80 million to date, threw out the ceremonial first pitch for the game against the Baltimore Orioles.

Check out the ceremony in its entirety in the video below. 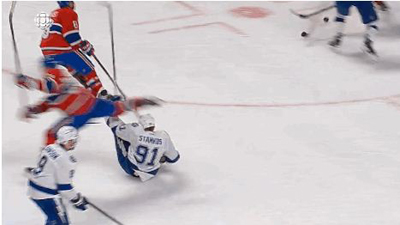