NFL Network’s “Top 100 Players of 2014″ series wrapped up Wednesday night, and the final results have some New England Patriots fans less than enthused.

Denver Broncos quarterback Peyton Manning finished No. 1 overall, just ahead of Patriots quarterback Tom Brady, who came in at No. 3.

Manning finished his record-breaking 2013 season with 5,477 passing yards and 55 touchdown passes. The 38-year-old also guided the Broncos to Super Bowl XLVIII, defeating Brady and the Patriots in the AFC Championship Game before losing to the Seattle Seahawks in the big game. Brady finished with 25 TD passes — his lowest total in a full season since 2006 — and 4,343 yards through the air.

Detroit Lions wide receiver Calvin Johnson came in at No. 2 in the latest edition, while two running backs, Adrian Peterson of the Minnesota Vikings and LeSean McCoy of the Philadelphia Eagles, checked in at Nos. 4 and 5, respectively.

Two other Patriots players made the list, with cornerback Darrelle Revis at No. 37 and tight end Rob Gronkowski at No. 41. 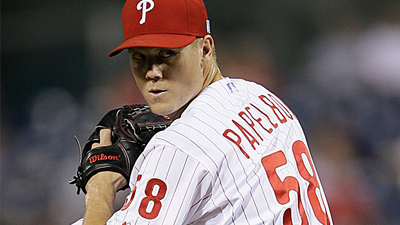 Jonathan Papelbon Wouldn’t At All Mind Being Traded To Contender