David Ortiz launched a mammoth three-run homer in the third inning. It was the only offense Boston needed.

Allen Webster earned the win in his first major league start of 2014. The 24-year-old allowed two runs on three hits over 5 1/3 innings. He struck out four and walked five.

The Red Sox will return home Monday after a disappointing road trip in which they went 2-5. But at least the trip ended on a positive note.

Mid 9th, Red Sox 3-2: The Red Sox are three defensive outs away from snapping their five-game losing streak. Koji Uehara is coming in.

Boston couldn’t add to its one-run lead in the top of the ninth inning. Jackie Bradley Jr., Brock Holt and Daniel Nava went down in order.

David Ortiz’s three-run homer back in the third inning has held up for Boston to this point. Uehara will try to make sure it’s all the offense the Red Sox need.

The Red Sox are 36-0 this season when leading after eight innings. They are the only team in Major League Baseball without a loss when entering the ninth inning with a lead.

End 8th, Red Sox 3-2: Junichi Tazawa imploded in Friday’s series opener at Tropicana Field. He bounced back in a big way in the finale.

Tazawa pitched a scoreless eighth inning. The right-hander struck out two while retiring the side in order.

Brandon Guyer, who pinch-hit for Matt Joyce, tried to drop down a bunt. Christian Vazquez quickly popped out from behind the plate to make the play and toss to first. Nice work by the Boston backstop.

Tazawa struck out Evan Longoria and James Loney — both looking — to end the inning.

Jonny Gomes pinch-hit for Mike Carp against the left-hander. He struck out swinging. Beliveau went back to the fastball after a curveball to pick up the strikeout.

Stephen Drew flied to center field. Vazquez, like Gomes, struck out. The rookie catcher foul tipped a fastball into his counterpart’s mitt.

Andrew Miller took the mound for the bottom of the eighth inning. Brandon Guyer has been announced as a pinch-hitter for Matt Joyce, though, so the Red Sox will turn to right-hander Junichi Tazawa.

End 7th, Red Sox 3-2: Andrew Miller, who has been the subject of trade rumors in recent days, issued a leadoff walk in the seventh.

Kiermaier’s successful bunt was the result of self-defense more than anything. Miller threw a pitch up and in, and Kiermaier barely put the bat on it, which was fortunate because it might have otherwise hit him.

Miller escaped the inning by retiring Desmond Jennings and Ben Zobrist. Jennings struck out looking and Zobrist grounded to short.

Cesar Ramos took over after six innings from Chris Archer. Ramos recorded two quick outs before running into some trouble.

Brock Holt tried to bunt his way on. He couldn’t push it enough toward second base, though, and first baseman James Loney grabbed it. Holt was ruled out after running out of the baseline.

Nava struck out swinging for the second out, but Ramos walked Dustin Pedroia. Pedroia stole second base. Catcher Curt Casali’s throw bounced and struck Pedroia in the back of the head, but Pedey — obviously — stayed in the game.

The Rays opted to intentionally walk David Ortiz with first base open. Joe Maddon then called upon Kirby Yates, who struck out Shane Victorino in a battle of two Hawaiians. Victorino saw 14 pitches in the at-bat.

Allen Webster started the inning. He was removed after Jackie Bradley Jr. made a tremendous catch in center field to rob Evan Longoria of an extra-base hit.

Longoria threatened to send a ball into the left-center field gap. Bradley raced over and back toward the warning track, ultimately lunging to make a fantastic running grab. Bradley’s incredible range again was on display.

Edward Mujica took over and recorded the final two outs of the sixth. Yunel Escobar flied out. Sean Rodriguez, pinch-hitting for Col Figueroa, popped out to Dustin Pedroia.

Drew flied out to left field. Vazquez and Bradley grounded to third base and shortstop, respectively.

Archer has thrown 106 pitches (68 strikes), so his afternoon likely is over.

Desmond Jennings, who drove in both of Tampa Bay’s runs with a two-run double back in the third inning, grounded out.

David Ortiz led off the fifth with a towering fly ball to right field. It soared up near the catwalks, but Kevin Kiermaier sized it up and made the catch.

Ortiz actually was given a second life in the fifth inning, as a popup landed in foul territory along the third base line. Archer and third baseman Evan Longoria, who was shifted over, gave chase but couldn’t make the play. In fact, Archer overran the ball despite a solid effort.

Shane Victorino and Mike Carp both grounded out.

Webster has had some control issues in the contest, much like he did during his time in the majors last season. He walked Yunel Escobar and Cole Figueroa in the fourth while also tossing a wild pitch.

Webster preserved the one-run lead, however, by retiring Curt Casali and Kevin Kiermaier. Casali flied out to center field and Kiermaier grounded to first base.

Mid 4th, Red Sox 3-2: Daniel Nava has a couple of hits. He continues to swing the bat very well since his call-up in early June.

Nava singled with two outs in the fourth inning after Chris Archer struck out Jackie Bradley Jr. and Brock Holt.

Bradley and Holt both went down swinging. Bradley, who struck out on three pitches, came up empty on an 0-2 slider. Holt swung through a 95 mph fastball.

Allen Webster issued a one-out walk to Curt Casali. Kevin Kiermaier then smoked a comebacker right off Webster’s legs for a single.

Webster recovered and attempted to throw out Kiermaier despite getting drilled, but his toss to first base was too late. Red Sox manager John Farrell and trainer Rick Jameyson checked on Webster. The right-hander indicated he was OK and pressed on.

Desmond Jennings delivered a big blow two pitches later, though. Jennings hit a ball into the left-center field gap that one-hopped the wall. Both Casali and Kiermaier scored to cut Boston’s lead to one run.

Webster managed to escape the inning with a lead still intact by striking out Matt Joyce and Evan Longoria. Longoria went down looking and wasn’t happy with home plate umpire Vic Carapazza’s call.

Mid 3rd, Red Sox 3-0: David Ortiz made sure no fans had an opportunity to interfere with his deep drive in the third inning.

Ortiz, who had a potential home run taken away Saturday because of fan interference, crushed a ball well into the right field seats in the third.

Ortiz’s 25th home run of the season was a three-run shot. Daniel Nava walked with one out, and Dustin Pedroia reached on a chopper to third base that Evan Longoria unsuccessfully attempted to barehand.

Ortiz’s home run capped a seven-pitch battle. Chris Archer left a 3-2 fastball right out over the heart of the plate.

It’s worth noting — because we all know the history between these teams — that Ortiz had quite the bat flip after launching his home run.

Archer threw 44 pitches in the inning. He already has thrown 75 overall.

Webster retired the side in order on seven pitches.

James Loney and Yunel Escobar both swung at the first pitch. Loney flied out to left field and Escobar lined out to short.

The Rays took their first 15 pitches of the game — perhaps trying to get a look at Webster — but were much more aggressive in the second inning.

Vazquez, who showed off his rocket arm in the first inning, singled into center field with two outs in the second inning.

Jackie Bradley Jr. flied out to right field to end the inning.

End 1st, 0-0: Allen Webster is off to a good start, though it was catcher Christian Vazquez who stole the show in the first inning.

Webster struck out Desmond Jennings looking to begin his outing. Webster fell behind 3-1 but battled back. Vazquez did an excellent job of framing a 3-2 fastball off the outside corner.

Ben Zobrist walked with one out. He was gunned down by Vazquez as part of a strike-him-out, throw-him-out double play.

Mid 1st, 0-0: The Red Sox picked up right where they left off Saturday night.

The Red Sox went 0-for-7 with runners in scoring position and left nine men on base in Saturday’s loss. Boston left two men on base in the first inning of Sunday’s series finale.

Daniel Nava laced a one-out single into right field. Dustin Pedroia followed with a hot shot to first base knocked down by a diving James Loney. The ball kicked away — allowing Pedroia to reach safely and Nava to advance — but the diving stop perhaps saved a run.

The Red Sox’s offense sputtered from there. David Ortiz struck out swinging and Shane Victorino hit a chopper back to pitcher Chris Archer.

1:41 p.m.: Chris Archer hurls a first-pitch strike as the Rays look to finish off a three-game sweep of the Red Sox.

1:32 p.m.: It’s been an eventful weekend at Tropicana Field.

1:25 p.m.: Allen Webster has an excellent opportunity to showcase his skills Sunday. The Red Sox obviously have high hopes for the right-hander, and he should have a chance down the stretch to pitch his way into a major league role for 2015.

Webster struggled for the most part during his eight major league appearances (seven starts) for the Red Sox in 2013, posting a 1-2 record and 8.60 ERA over 30 1/3 innings. The 24-year-old has nasty stuff and a ton of potential, though.

Just kidding. Those guys aren?t going anywhere. But they?ll still sit out Sunday?s series finale — at least to start the game — as the Red Sox look to snap their four-game skid against right-hander Chris Archer.

Daniel Nava will play left field against the righty. He?ll also bat second with Dustin Pedroia sliding into the No. 3 spot and David Ortiz batting cleanup in Napoli?s absence. Mike Carp, who asked the Red Sox for a trade, will play first base and bat sixth behind the red-hot Shane Victorino.

Sunday?s complete lineups are below.

11:45 a.m. ET: The Red Sox appear to be in sell mode with Major League Baseball?s non-waiver trade deadline just days away. As such, you never know if this could be the last time some of these guys don a Boston uniform.

Red Sox general manager Ben Cherington said Saturday after trading pitcher Jake Peavy to the San Francisco Giants in exchange for two minor league pitchers that the club wasn?t closing in on any additional deals. The trade deadline represents a fluid situation, though, so business could pick up at any point. It?s part of what makes this time of year so exciting for fans yet so stressful for players.

Sometimes, because of the hot rumors and what not, it?s easy to overlook that there still are very meaningful games being played. Sure, the Red Sox?s 2014 outlook looks grim, but the remainder of this season will go a long way toward impacting future personnel decisions. Therefore, turning away now shouldn?t be an option.

Take Sunday?s series finale against the Tampa Bay Rays, for example. Allen Webster, one of Boston?s top prospects, will make his 2014 big league debut. It?s unclear who will occupy the spot in the Sox?s rotation vacated by Peavy, but Webster certainly is auditioning for the job. The 24-year-old also is auditioning for a place in Boston?s 2015 rotation, which might or might not include Jon Lester. There?s a lot to figure out.

Webster faces a tall task Sunday, as the Red Sox have dropped five straight and the Rays have won nine in a row. The teams obviously are trending in opposite directions, so it?s hardly an ideal situation for the hard-throwing right-hander.

Sunday?s first pitch is scheduled for 1:40 p.m. You?re encouraged to tune in on NESN and follow along with NESN.com?s live blog 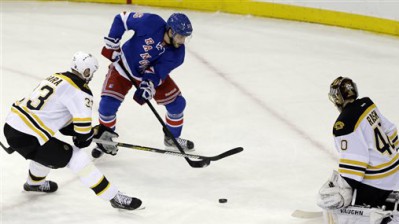