Bobby Robins Hopes To Stick Around With Bruins After 'Dream' Debut - NESN.com Skip to content BOSTON — Bobby Robins has spent the vast majority of his hockey-playing career in the secondary cities of North America: Binghamton, Rochester, Abbotsford, Providence.

Robbins entered this week with a grand total of 280 games played in the American Hockey League but exactly zero at the NHL level.

That changed Wednesday, when the banged-up Bruins kept the 32-year-old brawler on their roster for opening night of the regular season. For Robins, who played his college hockey just up the road in Lowell, his NHL debut was the culmination of a nearly decade-long journey.

“It was awesome,” Robins said after the Bruins’ 2-1 win over the Philadelphia Flyers. “After nine years, to have that happen, it was a dream come true. To play here at the Garden after playing for four years at UMass Lowell and always watching the Bruins over the last bunch of years, it was a very special feeling. I’ll never forget it.”

Robins, who said his wife and young daughter were in attendance at TD Garden, skated alongside fellow rookie Craig Cunningham and veteran Daniel Paille on the Bruins’ fourth line and performed as advertised. The trio accounted for 10 of the Bruins’ 23 hits in the contest — Robins had a game-high five — and was on the ice for the game’s only fight.

Robins, of course, was the one throwing the punches.

Robins and Cunningham teamed up to run Flyers center Zac Rinaldo — who had been whistled for roughing on B’s defenseman Torey Krug in the first period — hard into the boards midway through the second. Robins was sent to the box for charging on the play, but not before Philadelphia blueliner Luke Schenn came to Rinaldo’s aid.

The two traded a number of hard punches, and Robins briefly fell to a knee before recovering and taking down Schenn.

“I just saw an opportunity to get a good run at Rinaldo there,” Robins said. “He’s known to be a pretty big hitter and took a few runs at our guys, so I was hoping to get a good bump on him, and one of his teammates came in and stuck up for him.”

Schenn and Robins were still jawing at each other from their respective penalty boxes — standard stuff, Robins says.

“He was asking if it was my first NHL game,” the P-Bruins vet said.

“I said, ‘Yeah.’ Just the normal stuff guys say after a fight.”

Robins now can officially say he has played in an NHL game, but now that he’s tasted the sport at its highest level, he has no desire to head back to Providence. 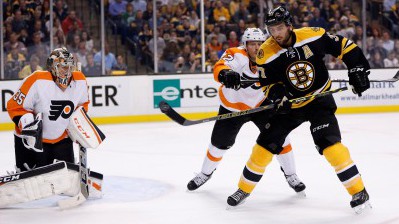 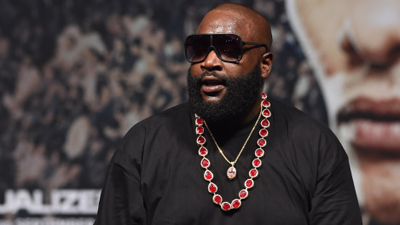