Rusney Castillo has a fan in Alex Cora.

Cora, a former Boston Red Sox infielder, recently managed Castillo in Puerto Rican winter ball. The 27-year-old outfielder left quite the impression on Cora despite only playing in 10 games for the skipper’s Criollos de Caguas squad.

“He has a great approach,” Cora said Thursday on WEEI’s “Middays with MFB.” “He only played 10 games for us and to be honest with you, I don’t know how many hits he had, but everything was back up the middle or to right center. As you guys know, if he keeps that approach for a long period of time, you’re going to hit for average. I was very surprised with that.

“Usually with the guys we’ve seen from Cuba coming to the big leagues, they are dead pull hitters, very aggressive, a little bit out of control. He was the total opposite.”

Castillo, who signed a seven-year, $72.5 million contract with Boston in August, showed promise in his first taste of the majors last season. The Cuban slugger hit .333 (12-for-36) with two homers, six RBIs, three stolen bases and a .928 OPS. He continued his work this offseason in the Arizona Fall League and the Puerto Rican Professional Baseball League. Castillo had success at both stops despite a brief battle with a thumb injury.

“I would hit him leadoff with time,” Cora said. “The good thing with that lineup now with all those big names — Hanley (Ramirez), (Pablo) Sandoval — the spotlight is not going to be on him. Early in the season, you hit him seventh, eighth, down here and he gets used to it.

“I don’t think he’s a middle of the order guy,” Cora added. “I think he’s going to be a game-changer at the top of the lineup, or one of those guys that can hit seventh and pick up the slack with whoever is up there running the bases, he can drive them in.”

Castillo might still be adapting to life in the United States. But he sure has some impressive tools. 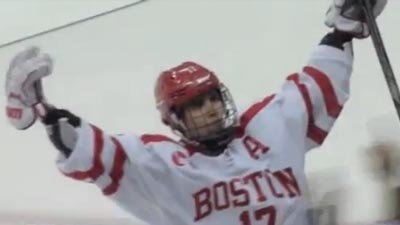